How a pair of Ford enthusiast brought a forlorn and forgotten Lada 1500 back to life and thanks to their attention to detail, this top of the range model is a gem.

What happens when you give a pair of Ford fans a Lada to restore? Something special, if this 1500ES is anything to go by...

John Beckett is very much a Ford Consul Classic and Capri man. Indeed, some of his superbly restored Consul Classics and Consul Capris have previously graced the pages of Classics Monthly. This is a passion he also shares with his son, Paul, as his Consul Capri was featured in the August issue of CM. Despite the pair’s allegiance to the Blue Oval, John also owns this Russian runabout. It’s one of a mere handful that are known to still reside in Britain and what’s more, with his son’s help John Becket was driven to restore it. But owning, let alone restoring a Lada was not on the Beckett’s radar. Not even a faint blip. Yet on occasions fate steps in and plays its hand and it was a chance remark, during a conversation at one of the local shows they attend that piqued John’s interest. John had got chatting to a chap who mentioned that he owned an Escort Mexico. During the course of the conversation, the guy happened to mention that he had this old Lada and although it was in reasonable condition it hadn’t been on the road in years. John went on to explain the reason why the car had been laid up. “The owner had booked a holiday, but on the day he and his family were to leave for the airport the Lada wouldn’t start. So he hired a car and the Lada was pushed into an outbuilding and for various reasons it stayed there for the best part of twentytwo years. Then the chap mentioned that he’d like to sell it. However, because he lived right out in the middle of nowhere, no one could be bothered to come and view it. Well, Paul and I were interested and we made arrangements to go and see it.” 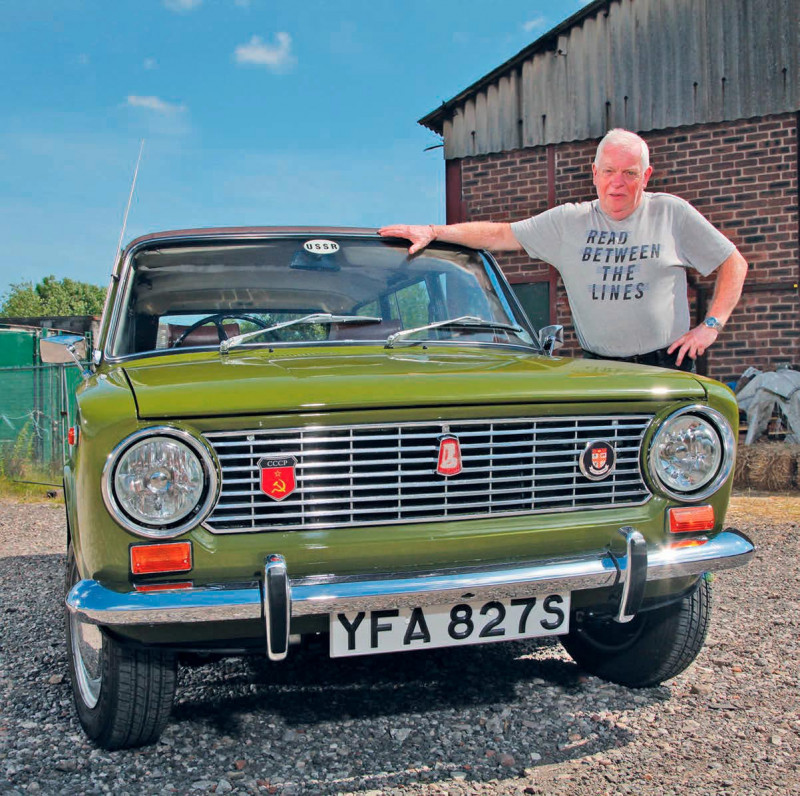 When John and Paul arrived, they discovered that the Lada wasn’t problem-free but it was definitely worth salvaging, especially as the seller only wanted scrap value for it.

“The condition wasn’t too bad,” admits John. “The rear arches were rusty, but the sills, doors and floorpans were sound. When it was laid up, he’d poured oil into the doors and the sills. Even the vinyl roof was unmarked and there were no signs of any rust bubbling through underneath. Plus, beneath the accumulated dust and dirt the interior was in mint condition. Mechanically it was reasonably good. He’d even poured oil down the bores, as the engine turned over easily”.

John thought the car had a certain charm and as Paul and himself have been involved with Classics and Capris for so long, the pair felt that restoring the Lada would make a nice change. “That said, because we reckoned it wouldn’t be worth a great deal, even when restored, we decided to be cautious when it came to expenditure. Luckily, Paul’s very handy when it comes to bodywork, so he did the welding and some of the preparation which saved us quite a lot” added John.

Paul began by repairing the rear arches and quarter panels. There was also some rust evident behind the badge on the tailgate. This was cut out and replaced with new metal. Having also discovered a small amount of rust in the driver’s footwell, Paul had to undertake a small repair to the area behind the pedals. The jacking points had to be renewed too. But in terms of the metalwork repairs, that was it. Not bad for a 1977 Lada, especially one that had been laid up for so long. With the bodywork sorted, the long-languishing Lada was taken to Stoke Bodyshop where it was painted. But not in the original colour according to John.

“It was green originally but not a very nice shade,” said John smiling. “Having looked through lots of colour swatches, we decided to have it painted Fiat Moss Green. It’s a 1974 colour and appeared on lots of Fiat 124s, which is rather fitting seeing the Lada is based on the 124”. Moss Green seems to soften the Lada’s boxy, utilitarian shape and gives it a real presence. The pair couldn’t have chosen a better colour. It’s perfectly applied and the contrasting vinyl stripe adds a dash of style.

To ensure that the bodywork remains pristine, Dinitrol has been sprayed into every nook, cranny and orifice in the bodywork. This, and the fact that the car is garaged and is fitted with genuine, ‘heavy-duty’ Lada arch liners, should keep the dreaded tinworm at bay. Thankfully the Lada’s interior was in really good condition, with hardly any wear evident. All it needed to bring it back to life was a wash and brush-up.

With the bodywork in pristine condition and the interior looking almost like new, John and Paul turned their attention to the running gear. The front brakes had seized and the lower front wishbones were in a poor condition, as were the springs, dampers and struts. These were all renewed along with the copper and hydraulic brake pipes and various suspension and steering joints. The wheels were shotblasted, painted and fitted with 155/13 tyres on the front, and a slightly beefier 165/13 at the rear. 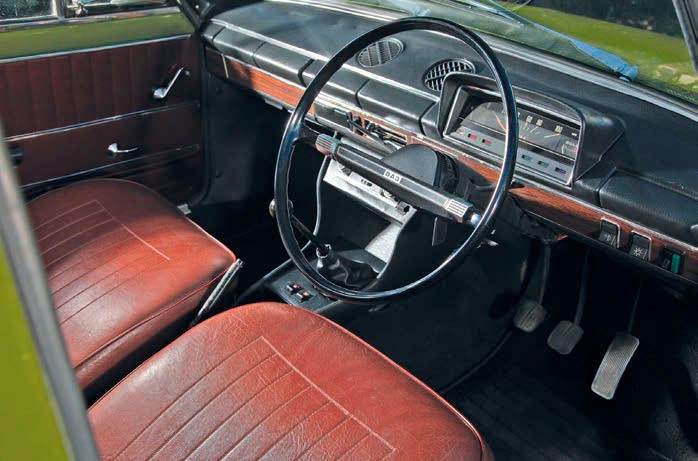 The engine, which had only covered 59,000 miles, was found to be in very good order. Even so, to aid starting the points were swapped for an electronic set-up. Mind you, should it ever refuse to start, John can always resort to swinging the starting handle, as Lada supplied one with the car as standard. John also swapped the original and somewhat tired carburettor for a much better one. “I bought a Weber kit from Webcon,” he enthuses. “It fits perfectly and works exceptionally well, giving better economy, power and it’s much smoother-running too.”

Not only was the original carburettor in poor shape, so too was the rear section of the exhaust system. Amazingly, the local motor factor had a back box in stock. But it wasn’t cheap. “They wanted £65 for it,” explains Paul. “I thought it was a bit steep, so I did a search on the Internet and got one delivered for just £26. Incredible value seeing that it came all the way from Luxembourg!” 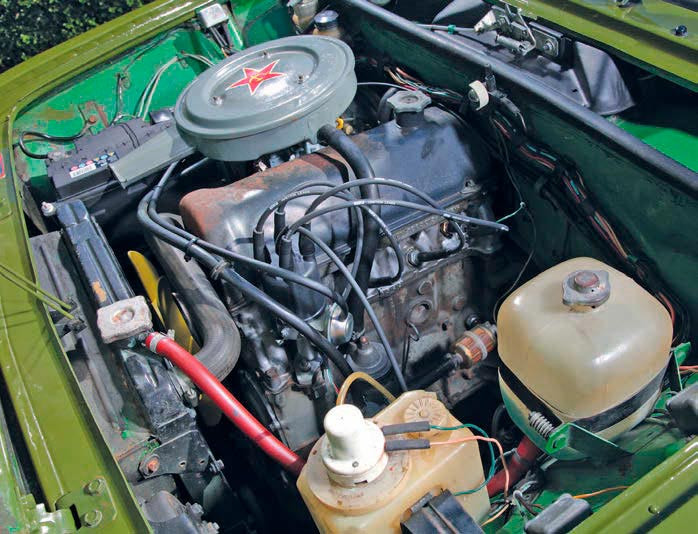 Transmission-wise, the Lada was in fine fettle. The gearbox swapped ratios perfectly, the clutch was in good order too and the rear axle was quiet and free from play. All John and Paul had to do was drain the transmission oils and replenish with fresh fluids.

In terms of the exterior, new, period-looking headlights were fitted complete with new chrome surrounds. All of the other lights and clusters are also new, as are the bumpers but according to John, thereby hangs a tale. “There’s a Lada Facebook group,” explains John. “A guy in the group who lives in Lithuania had bought a load of new old stock parts from a local dealership. On the off chance, I emailed him to ask if he happened to have a pair of estate bumpers. Not only did he have some, he said that he’d get a friend to delive them ...all the way from Lithuania.

“I was a bit sceptical. But true to his word a few weeks later, this bloke turned up with the bumpers. It cost us €160 for the bumpers and we gave him £30 for fuel plus a bottle of Lucozade and a Mars bar for the journey.”

When John and Paul embarked on this project, they fully expected it to be delayed by parts availability and costs. However, thanks to sourcing parts on the Internet the restoration was completed within a very short timeframe and well within budget. “Without the Internet we couldn’t have restored the Lada,” confesses John. “It was so easy to get hold of the parts. And they were so cheap. We did source quite a few parts from the LADA Shop in the Netherlands, but the majority came from Lada Moscow. Thankfully, on the few occasions we had to phone Lada Moscow, they spoke pretty good English. The customer service was great and they even put a handful of Russian chocolates in with every order.

“We’ve had some luck in the UK too. The car was missing one hubcap, but I found one at an autojumble!” We even managed to find a new roof lining, but haven’t got around to fitting it yet. It’s not one of our favourite jobs!” Interestingly, John and Paul haven’t had to buy all of the parts needed. Some have been donated. “When we’ve been to shows, people have been so interested in the Lada, particularly those who’ve owned them, a few have donated us parts,” explained John. “Someone even gave us a genuine Lada toolkit.”

Lada is a marque that has been the butt of many a cruel joke over the years, but that’s a tad unfair for a good number of reasons. And, our feature 1500ES is deserving of nothing but praise. It looks fantastic and is such a practical and easy-to-run proposition.

Modern car design has dictated that many of the current crop of estates are styled as ‘lifestyle’ vehicles and this often compromises practicality. The Lada, with its design rooted in the ’Seventies is a capable carry all with plenty of space for five and their luggage. It’s a car that lives up to its promise. Moreover, in a simple, workmanlike way, it has real charm and character.

Although it’s thought that some 350,000 plus Ladas were imported, only a very small number of Lada 1500 saloons/estates are to be found in the UK. They are tough and simple-to-maintain cars. However, despite claims that the metal used was very thick and the company had undertaken extensive anti-corrosion measures, rust is likely to have been the major contributor to their downfall. Sensibly, buy the very best you can find. Mechanically the Lada is robust, just check for undue valve train noise, oil smoke from the exhaust, emulsified oil and gearbox/diff issue. General parts availability is excellent.

The Lada 1500 Estate was introduced in October 1977Lada stopped importing cars into the UK in 1997Ladas are still being produced in Russia. They are available in Western Europe but not in the UK.Although Lada, typically made basic models, British buyers usually demanded higher specifications and most cars were ‘up-specced’ in the UK by a special team.The ‘up-speccing’ components were usually all UK-sourced.

What is special about this car?

Because it’s so rare and a survivor.

What reaction does it get?

Everyone wants to chat about it and we are amazed by the huge amount of interest it generates at shows.

What was the best moment of the restoration?

When the paintwork was completed and we knew we’d made the right colour choice.

What are you most proud of?

That’s it back on the road after twentytwo years.

It actually drives very well. The handling’s pretty good, as is the performance. To be honest, it’s a good all-rounder.

Very strange and agricultural-spec of fiat 124 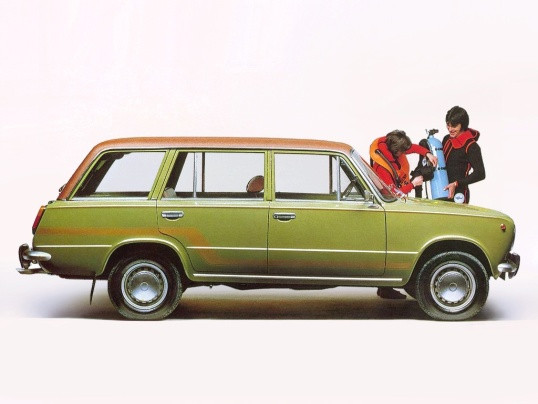