Within mankind’s furious pursuit of technology, few machines possess the same individuality and soul as the motor car. From the automotive white good bought as an appliance, to the rarest of sporting exotica, cars speak volumes about their owners’ sense of the world, and never in more detail than in a custom build such as this one. For the suitably named Eugene Metzger, however, encapsulating a little of his 911 SC’s previous owner’s personality was just as important as leaving his own mark. 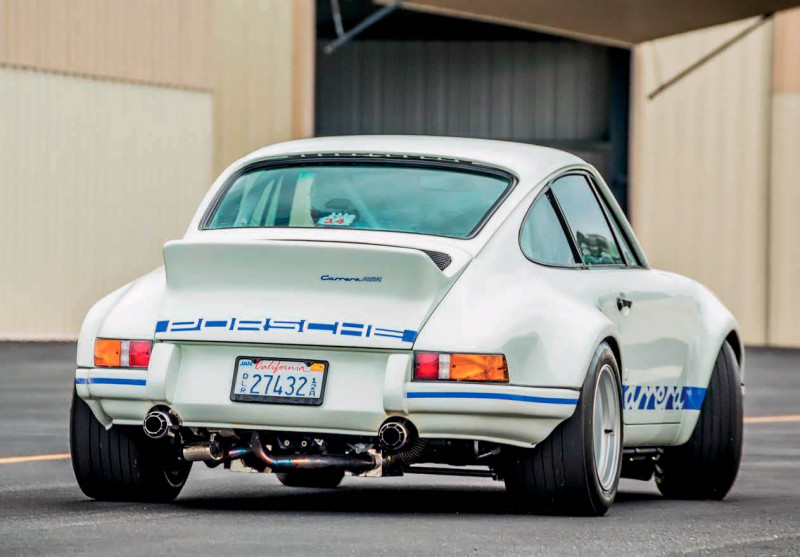 “This car belonged to a close friend of mine, Bob Schwalm, who used to race motorcycles and old Porsches,” he explains. “Around four years ago, he developed multiple sclerosis and, within six months, had passed away at the age of seventy-three. He had a couple of Porsches and a Chevron racer in his garage. When we talked about what he wanted to do with the cars, he said wanted me to have his 911 SC. His widow agrees with me that he would have gone insane over how the car turned out — it’s exactly the kind of custom Porsche which got him excited.”

This particular pairing of man and machine felt fated to happen. A serial classic Porsche owner, Eugene had formed a friendship with Simo Veharanta, founder of SV Automotive Engineering, a California-based Porsche restoration specialist which Eugene had called upon during previous restorations of a 912 and 356 C. Repeat visits to Simo’s workshop provided a taste of what more the company could offer — SV Automotive Engineering specialises in nut-and-bolt resto-modded 911s, built as if 1970s-era Porsche engineers had modern technology at their disposal. Eugene realised the company was wellplaced to satisfy a long-term desire.

“I was about six or seven years old when the 911 Turbo was released in the mid-1970s” he recalls. “I would have been a teenager when Porsche released the 3.3-litre version, which has always been my dream car. Simo had been working on me to build a bespoke 930 for several years. I already had a Turbo engine in storage when Bob’s SC became available to me. Needless to say, I found myself presented with the perfect opportunity to take Simo up on his invitation.”

Bob’s love of performance had been accompanied by a great deal of mechanical sympathy and an eye for a good purchase. The SC had been registered in California in 1979 and had managed to avoid unplanned departures from the road and undesirable trips to filler-happy body shops in the years which followed. Arrow-straight, rot free and still wearing the factory-applied Sepia Brown, the air-cooled classic was a superb starting point for Simo to bring Eugene’s dream to reality, not that an SC offers any opportunity for shortcuts.

“We start with an empty body,” Simo explains. “Every nut and bolt is removed. We strip the shell down to bare metal and put it on a jig, then form a sunroof delete panel on an English wheel before welding the part in place and finishing with lead. On Eugene’s car, we fabricated our own metal 911 Turbo fenders and TIG-welded them to the body and into 1973-style front panels, adding the correct wide-body bumpers. The only job we subcontracted was application of paint.”

Despite visual links to early 1970s Porsche race cars, the mechanical side of this transformed SC is firmly rooted in the forced induction era. SV Automotive Engineering has developed a fantastic bespoke air-cooled 911 Turbo engine, using a 3.3-litre unit as a base. The specification used for Eugene’s car was already proven in other builds — the block is Nikasil-lined and overbored by 1mm, upping capacity to 3.4 litres. It is also equipped with higher-compression CP Carillo pistons, Pauter connecting rods and an uprated oil pump, while the heads are home to enlarged Inconel valves and custom Web Cam camshafts, all tailored to the uplift in boost pressure. Where the 911 Turbo had been renowned for its ferocity in the 1970s, this car has the muscle to keep up with modern performance machinery. The engine offered strong foundations to size up to one of the largest, custom-built turbochargers Simo has ever fitted, while the 917-inspired exhaust system is tightly wound in behind the bumper.

Its right tailpipe comes almost directly out of the turbo via only a small resonator, while the other is a vent for the wastegate. Of course, a classic 911 RSR’s body lines were never penned with turbocharging in mind and, with no ‘tea tray’ spoiler to allow space for the intercooler, Simo had come up with his own, highly efficient solution. “It’s a dual-core intercooler, which we designed and fabricated in our shop,” he says, lifting the decklid on the team’s handiwork. “We have engineered the largest intercooler you can install beneath a ducktail. There’s only millimetres of clearance. It took my team a fair amount of work to fit it all in there.”

Transmission parts were also cherry-picked, using only the best components from the air-cooled toybox. The engine runs a significantly lighter flywheel than standard, while the G50 transmission offers five gears instead of the early 930’s four. Fully rebuilt, it features a shortened bellhousing to fit the early chassis, plus it features a limited-slip differential to make the power more manageable. This car hasn’t been on a dyno, but previous builds have shown this setup is good for around 500hp. Suffice to say, heavy throttling delivers all the white-knuckle savagery that you’d want from a 1970s 911 packing forced induction, with power arriving suddenly, in one hit.

“The perfect car is the result of perfect components, which is why we look at every nut and bolt as having its own identity,” Simo confirms. “We didn’t aim for the most horsepower you can make. We wanted reliable performance you can drive with every day, hence using the best engine internals. This is a very user-friendly car. It feels as tame as your mother’s Corolla, until you get into boost. Then all hell breaks loose!”

Chassis hardware was chosen during the early stages of the build, and the foundations were engineered into the bare shell. Simo used adjustable RSR-style antiroll bars, while the shock towers were strengthened, enabling a Bilstein coilover conversion. Front-end rigidity is boosted by a strut bar. Hidden behind period-correct staggered fifteen-inch Fuchs wheels and chunky semislick Michelin TB15 tyres, the brakes are matched to the very modern turn of pace — the calipers and discs are those of a Cayman S, mounted on billet adaptors.

Although this is very much a driver’s car, the aim was never to turn Bob’s SC into a track-focused 911. Granted, Eugene sacrificed the rear seats for a colour-coded bolt-in half-cage, but the cabin is comfortable enough for touring and carefully backdated in line with the bodywork. The half-leather RS-style bucket seats are tilt-adjustable for comfort and paired with matching door cards, while the blue seat belts and rev counter link to the colour-contrasted body graphics. With an aggressive turbo to manage, that central gauge — peering through the drilled spokes of a MOMO Prototipo steering wheel — is the one to watch.

Eugene says the car strikes a good balance. “It’s like a factory 930 after a giant dose of steroids,” he laughs. “It’s grossly overpowered, but also super-manageable. The overall experience is incredibly raw because there’s nothing to save your butt, yet the drive is incredibly communicative, meaning you know everything that’s going on. If there’s an ant turd on the road, then the chassis is telling you about it!”

He should know. Irreplaceable due to sentiment and the near three-year build process that got the car to where it is today, you could excuse this 911 for becoming a machine only brought out for occasional use. It isn’t.

In fact, it’s a near daily driven commuter car, ferrying its owner and his kids to work and school with the soundtrack of crackling exhausts and an unsilenced flat-six. At the veterinary surgery Eugene owns, there’s a garage on-site to store the car safely in readiness for the journey home. And all this usability means he’s had plenty of time to familiarise himself with his big-power, RSR-styled 911. Consequently, he’s shaping plans to make this an even more accessible tourer, regardless of the extremes of the Californian climate — the 911 is due a short stay at Simo’s workshop for installation of a RetroAir electronic air-conditioning system, which hides most of its hardware behind the dashboard or in the ‘smuggler’s box’, so as not to detract from the car’s race-inspired character. And near-future ideas for the drivetrain mean there won’t be any performance compromises as a result, as Simo explains. “We’re fitting a military-grade wiring harness and an AEM standalone engine management system, which means we can run electronic fuel injection and control the wastegate for a faster-spooling turbocharger. The idea is to perfect the air-fuel mixture to make a bit more horsepower, but also to make the car even more reliable and last long into the future. It’ll also make this 911 more user-friendly in normal driving conditions.”

All of which feels like a fitting tribute to its previous owner, as well as to the 1970s race cars which served as inspiration for the build. Bob was able to give his seal of approval to the early stages of the project before his passing, and with his life-long love of performance, it’s hard to imagine he’d be anything other than delighted to see his legacy live on in metal, glass and rubber. After all, even within the scope of the always-personal motor car, few machines are better equipped to promote self-expression than a classic 911.

Above Custom exhaust was manufactured with inspiration taken from the 917 race car. Above SV Automotive Engineering has showered a huge amount of attention to detail on Eugene’s 911, resulting in every aspect of the car beautifully presented.

Below Simo claims this to be the largest intercooler manufactured for installation beneath a ducktail engine lid.

Above Interior has been left with enough creature comforts to enable easy touring when Eugene isn’t exploring potency of the engine’s force-fed 3.4 litres. Above Simo’s transformation of the SC is first-class, with the car now packing serious firepower and RSR looks.

Holy shit Simon I need to test drive it for Eugin. I wanna spool up that turbo baby!