‘From its eyelashed headlights to its slatted engine cover, the Miura must have looked like something from outer space’

Nowadays, we tend to bandy around the word ‘supercar’ because, frankly, the world is awash with them. But in 1966, the Lamborghini Miura P400 was perhaps the car for which the term was first coined. And with a then scarcely imaginable 174mph top speed, you can see why.

The fledgling Lamborghini car company (as distinct from the well-established tractor-making concern) had rapidly come to the fore with its first production model, the 350GT. Ferruccio Lamborghini was wedded to the idea of powerful front-engined GTs, much like rival Enzo Ferrari, but his young engineering team, led by Gian Paolo Dallara, had other ideas. Inspired by the competition success of Ford’s GT40 and Porsche’s 904, Lamborghini was persuaded to steal a march on Ferrari with a mid-engined production car, and by 1965 the rolling chassis was revealed at the Turin Salon.

Where Lamborghini eschewed convention was the transverse location of its Giotto Bizzarrini-designed, 3929cc 60º V12, plucked from the 400GT (the 350GT’s more powerful successor). At a stroke, not only was the engine’s weight brought closer to the car’s mid-point to sharpen handling, but space was also liberated at the rear of the chassis for some token storage. All that was needed then was a body design that would make Enzo weep with envy.

And boy, did it succeed. Bertone was tasked with clothing the Miura’s welded-steel backbone chassis, and he gave his 25-year-old designer Marcello Gandini responsibility for overseeing the project. To say that it was radical is an understatement when you consider that in the mid-’60s the only cars that came close to capturing such an essence of speed in their design wore roundels on their doors and were generally driven in circles. At 41.3in (1050mm) from ground to roof, everything about the Miura’s design was focused on allowing it to spear through the air faster than anything else on the road. From its eyelashed, pop-up headlights and sharply raked front windscreen to its distinctive slatted engine cover (which ventilated the mighty V12 while allowing some semblance of rearward vision), the Miura must have looked like something from outer space when it received its debut at the 1966 Geneva Salon.

Maybe as a statement of intent to link the Miura with the motorsport world (although it never became a competition car), one of its first post-show appearances was at the ’66 Monaco Grand Prix, where now-legendary Lamborghini test driver Bob Wallace drove VIP guests and media around the circuit. It was probably just as well that Monaco was a relatively slow circuit, since the car’s highspeed raison d’être was called into question after production of the first P400 model commenced in 1967.

It wasn’t that Lamborghini’s 174mph claim was in doubt – Motor clipped 171mph when it tested an early press car – it was more about the car’s propensity to take flight as it approached those speeds. The issue wasn’t fully resolved until the launch of the SV model in 1971, with slightly raised rear and lowered front suspensions to aid high-speed stability.

The above spools through your mind as you sit in this ’67 Miura P400, its immaculate Rosso Miura (nearer orange) paintwork glinting in the sun. At 5ft 7in I fit into most cars with room to spare, but once curled into the Miura’s black-leather- trimmed seat, I have just two inches of headroom. Everything about this car is low: two large, skeletal dials – one for revs, the other for speed up to 320kph (199mph) – dominate your sight line, while six secondary dials are angled towards you from a chunky, rectangular binnacle ahead of an open-gated five-speed gearshift.

Turn the ignition and wait for the fuel pump to deliver sufficient super unleaded, then the engine fires and fills the small cabin with a multi-cylinder soundtrack straight out of Grand Prix. Behind, a shallow screen is all that’s between your right ear and two of the four, three-barrel Webers atop the motor, rocking as you blip the throttle. This car is all about the engine; everything else is mere distraction. It’s very physical to drive, partly because you need to reach so far to the canted three-spoke steering wheel, while your legs are noticeably kinked to connect with the long-travel, floor-mounted pedals. How did actor Rossano Brazzi make it look so cool in The Italian Job? But as you accelerate hard along Prestwold’s main straight, ergonomic failings fade away. Gear noise competes with the V12’s roar as you touch the ton, before heel-and-toeing down through the precise, mechanical ’box for the right-hander at the end. No issues at these speeds: the Miura feels rock-solid and stable, staying surprisingly flat through the faster bends.

If we were handing out awards for the intensity of the experience today, the Miura would win hands down. Never before has the prefix ‘super’ seemed so appropriate. 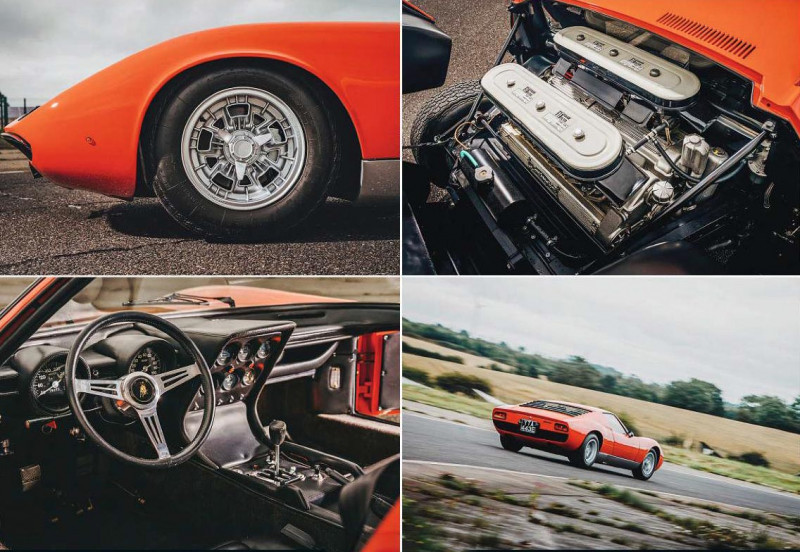