Ford heritage: Keith Halstead’s 1965 Lotus Cortina was the first of only eight Mk1s ever put into service with West Sussex Police — six decades later it’s better than ever.

British police cars during the 1960s tended to be Jaguars and Wolseleys that were fast but expensive, or Anglias and Morris Minors that were cheap but not especially quick. The Lotus Cortina offered performance and affordability, yet only eight were ever ordered and Keith Halstead’s example was number one. 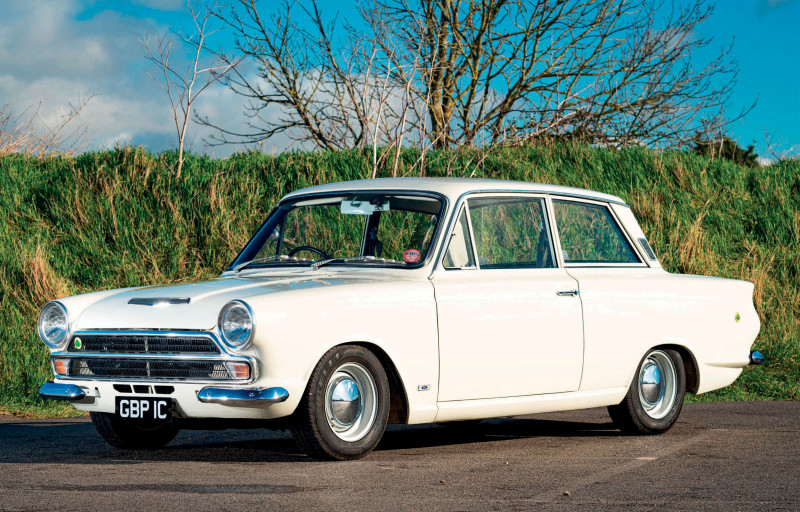 Keith takes up the story:

“In 1964 Lotus sales director, Graham Arnold wanted some free publicity and made a mock-up Lotus Cortina police car for promotional photos. While over in West Sussex, Police Transport Manager Christopher Williams needed a cheaper alternative to their fleet of Mk2 Jaguars. Since you could get three base model Cortinas for the price of a Jag, Williams visited the Lotus factory and placed an order.”

Five Lotus Cortinas, registered GBP 1C to GBP 5C, were delivered via Ford dealership Rowes of Chichester in June 1965, then later that year came GBP 7C, 8C and 9C. The GBP 6C plate had been taken by a member of the public for his Singer Gazelle. 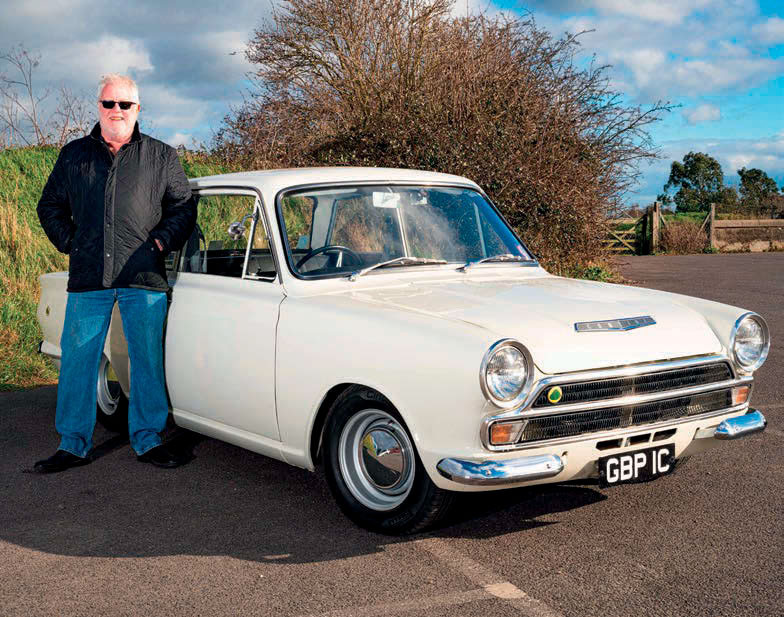 “My car was adopted by the West Sussex Constabulary in Chichester from 1965 to 1967,” continues Keith. “The Chief Constable felt the Lotus Cortinas ‘would be great for recruitment.’” During its two years of active service Keith’s Cortina ran three shifts a day, seven days a week, covering some 350 miles each day. “It was built in June of 1965 as an Aeroflow model and was one of the first with leaf springs to avoid the unreliability of the previous A-frame suspension. It had an alternator instead of a dynamo to cope with the extra electrical equipment including air horns, a top POLICE box with blue rotatinglamp and STOP sign, driver and passenger rear view mirrors, two-way radio and speaker, aerial on the boot valance, fire extinguisher, map reading light and transposed speedo and rev counter so that the passenger officer could verify the speed of a pursuit.”

The colour scheme was Ermine White minus the usual Lotus green stripe. West Sussex adopting an all-white finish to make the new cars stand out more than the previous all-black Jaguars.

“I heard police drivers would hold the pedal to the floor and only change gear when the rev limiter cut out the engine,” laughs Keith, “and there were 120 mph chases where the doors would flex showing daylight through the gaps between the frame and guttering. These cars were regularly serviced at a local garage and I spoke to one of the mechanics who was an apprentice at the time. He said that they’d all clamour to drive it when it came in for repairs or servicing. Ford used the police for extended warranty testing back then since the cars got hard use and high mileages. In 1967 when the fleet was replaced by Mk2s the outgoing Mk1s got a green stripe painted on and went to auction.” 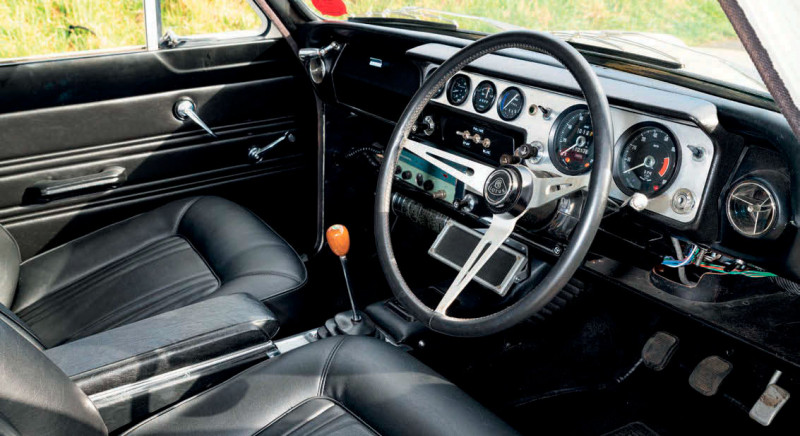 “The person who bought mine kept it until 1969 selling it to a man in Brighton who sold it in 1975 for £285,” continues Keith. “It went to a student who used it to get to and from college and his college mate got it in 1975 for £250. It changed hands again in 1977 and by then had a 1600 Crossflow engine since the twin-cam had been stolen while it was garaged. During this period, it also suffered a wiring fire and was rescued from the breaker’s in the nick of time — pardon the pun!”

The Cortina found a new owner in 1978 and then was sold again in 1981. “The next owner kept the car for 17 years undertaking major restoration work and winning car show awards in 1993 and 1994. I have photographs from during the restoration and the chassis was in a terrible state. By then it had a rebuilt engine and the traditional Ermine White and Sherwood Green livery. The car supposedly sounded really rough since the cam timing was one notch out on the exhaust sprocket — apparently this was the only way it would run.”

An advert in the Lotus Cortina Register (LCR) magazine in 1996 shows it for sale at £9500. The Cortina went to a dealer in 1998, then was sold in 1999 to an LCR member who restored it to the correct police specifications. “In late 2001 after seeing the car at several shows I bought it for £11,000 from Neil Quinn who had previously done a lot of research on the Cortina police cars and their histories. I hadn’t had it long when the clutch thrust bearing exploded, I pulled out the engine and decided to detail the complete engine bay while I was there. Once I’d repainted the engine bay I came by a replacement engine via a friend who was an apprentice of Colin Chapman and who’d had an unmolested Lotus Europa unit sat in his workshop since the 1970s. After a quick honing and new rings it fired up a treat.”

“I rewired the car because during the several times it let me down I’d managed to get it going again by wiggling the loom. I also traced the old ammeter which was taped up under the dash and sourced a remanufactured loom from Autosparks that slotted straight in. The Cortina ran very hot until I spotted it had a Cortina 1200 radiator fi tted – this was replaced by a triple-core 1500 rad which fi xed that problem. It always sat a bit lop-sided too until I acquired some original unused Ian Walker Racing springs, now it sits just right. It’s now got an RS2000 3.54:1 difffitted to help with motorway driving.

“I joined several police car groups online and managed to speak to ex-officers who confi rmed the car as genuine and correct. Through the assistance of the Police Vehicle Owners’ Club I sourced unique parts like the correct radio equipment and even managed to get the original 15 inch wood rim steering wheel after a previous owner mentioned he still had it in his loft — though I now run the SE leather-type of wheel since it’s much stronger.

“Recently I bought a police uniform from eBay and, incredibly, discovered from the label inside it belonged to one of the Cortina’s original drivers — he had since died but his son was delighted I had the car. “Today I use the car mainly for shows and sunny day drives,” explains Keith. “So far as I know, GBP 1C is one of two currently on the road. GBP 3C was used as a historic race car for a while before the original shell was then restored, and I traced GBP 4C to a garage in the Lake District where it had sat since 1977. After buying the car I then sold it to a friend who is currently restoring it. GBP 5C is also awaiting completion by its owner, and I believe 8C was scrapped in 1966 following an engine fi re, while GBP 9C has reappeared on the road. If you have more information regarding any of these cars I’d love to hear from you.”

“In 2010 I decided it was due for a total rebuild,” remembers Keith, “this was completed in 2011 by Colin Ginn at Prestige Coachworks, who is now semi-retired. The car had a lot of seam sealer underneath that was hiding the usual areas of rust. Colin had a large stock of parts so he was able to repair all the Lotus bits and replace others with original Cortina parts. The bodyshell got new sills, rear arches, valance and inner wings. I had a pair of new front wings in my shed while the rest was mainly cutting out old plated repairs and carefully letting in new metal. I completely rebuilt the engine with forged pistons, unleaded big-valve head and a total rebalance. It now develops about 126 bhp and was quoted as ‘one of the smoothest twin-cams’ he’d ever tuned by Steve Thomas at Dynatech. The interior was refurbished with correct Lotus seats made by Craig Watton at Classic and Custom Auto Interiors, along with Aldridge door panels, repro dash binnacle and a new set of carpets.” Keith’s Cortina (nearest to camera) along with the fi rst four other cars delivered to West Sussex Constabulary in 1965. Above and right: additional Police kit was extensive. Above: as-new engine had sat untouched since the 1970s and runs a treat. Keith’s now owned the car for over 20 years and is still unearthing info about the police Lotus.

“THERE WERE 120 MPH CHASES WHERE THE DOORS WOULD FLEX SHOWING DAYLIGHT THROUGH THE GAPS...”

Amazing amount of resurch and info! Finding the original wheel and the police uniform is simply staggering! Its just great to hear of such relevant history, every car has a story just some more so than others!