Without the visual marker of an M badge, the E46 330Ci Clubsport flies under the radar of the general populace: everyday thrills, delivered with subtle panache.

Is this Clubsport an M3 rival?

There’s a lot to be said for being understated. Still waters run deep, as the old saying goes, and it’s as true in the automotive sphere as anywhere else that what you see isn’t necessarily what you get – it sometimes takes a keen eye or an investigative demeanour to reveal the full story. Picture yourself in a dark, smoky dive bar in a hick town on a windy Friday night – the characters who’ll immediately catch your attention are the drunk office girls caterwauling around the jukebox or the frat boys slamming back thimbles of moonshine, but it’s the guy sitting alone at the bar that you need to watch out for. The one in the cowboy hat, coolly sipping neat bourbon and eyeballing everybody in the place to get the measure of every last soul – his appearance isn’t remarkable, and yet there’s something foreboding about his presence that makes him unmissable. That shadowy, sinister figure is essentially the embodiment of the E46 330Ci Clubsport, bestowed as it is with subtle menace and simmering aggression. Sure, it’s not the most outrageously focused or heavily modified E46 to appear in the motoring scene, but it doesn’t need to be, does it? You can tell just from a single glance that it’s the sort of car that cashes its own cheques, that doesn’t care what you think. And without even seeing it in motion, you just know that it’d be a devastating mover… 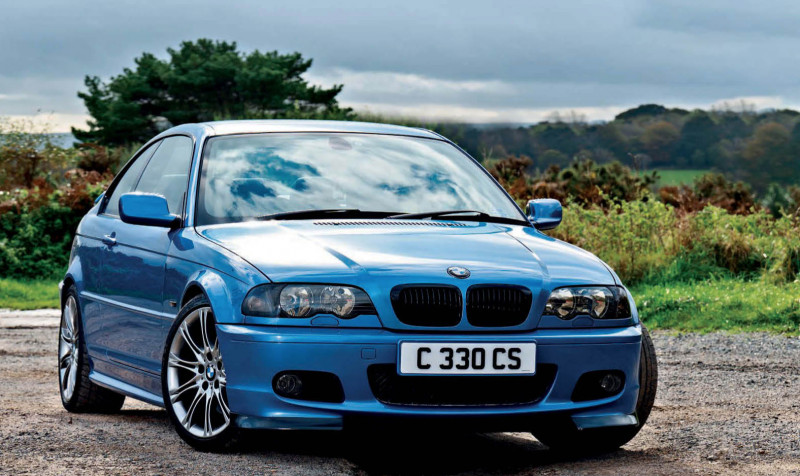 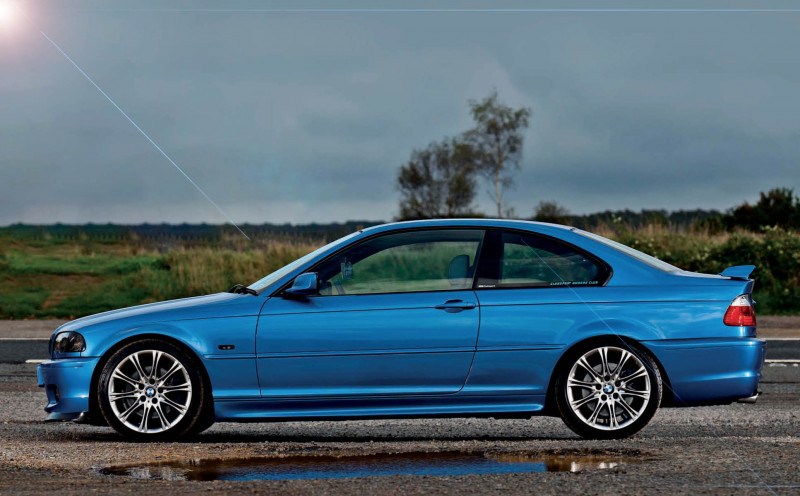 To a degree, of course, that can be true of any 330Ci. The act of taking a relatively sober-looking 3 Series and shoving in a feisty six-pot of such swollen swept volume was a masterstroke of mischief by BMW and, as the marque’s heritage dictates, these cars aren’t just about power. They’re about poise, handling finesse, chuckability, precision… there’s a reason that they’re seen as a high water mark of sporting coupés. But the Clubsport? That was something a bit different, a bit special. Mechanically akin to the mainstream 330Ci, complete with 231hp motor, it was within the details that the devil resided. The aesthetics were immediately marked out by the outré rear spoiler, which was complemented by model-specific 18-inch double-spoke alloy wheels and a more aggressive stance. Some 20kg of sound insulation was binned to allow the driver to hear the engine better, while the cabin was treated to sports seats trimmed in leather and Alcantara, aluminium cubed trim and a shorter gear lever. Titanium Silver was the standard exterior paint shade, although the true connoisseurs shelled out extra for the Individual options, either Velvet Blue or Estoril Blue. It wasn’t a compromised and strippedout special, but rather something that would bridge the gap in the model range between the 330Ci and the M3. And today, it’s worth remembering that the Clubsport is markedly more rare than the M3. More affordable and arguably more desirable? It’s a heady mix… 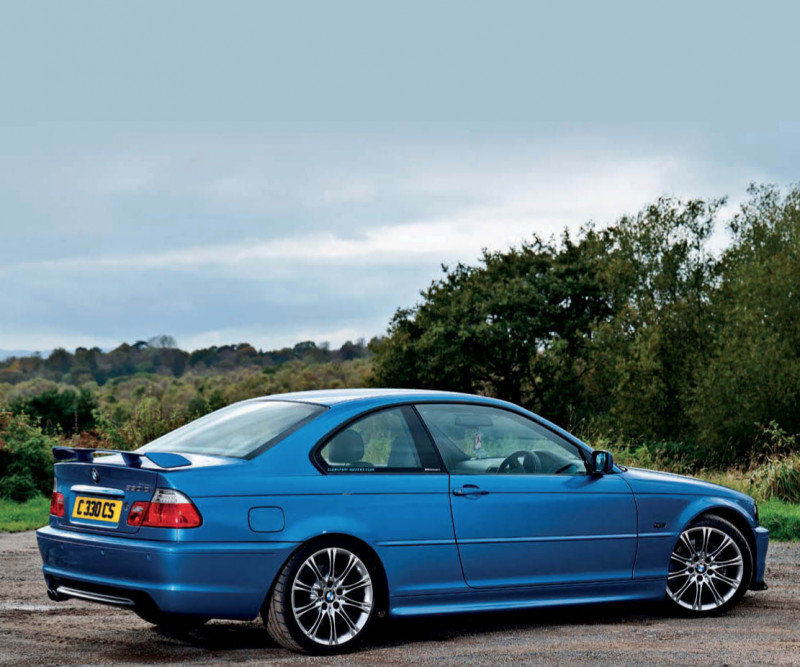 It’s this inherent fusion of athleticism and relative stealth that made this particular Clubsport really appeal to its owner, Chris Gladwell. His own automotive history is richly studded with quick cars that have an uncanny ability to fly under the radar – the Citroën Saxo VTR, the Mk6 Ford Fiesta ST… it may seem like a dramatic leap to graduate from warm hatches to a potent coupé, but the logical thread runs through them all. Entertaining dynamics wrapped up in everyday shapes.

“I have always thought the E46 had a timeless look, and was eager to own one,” he says. “One day I came across a picture of an Estoril Blue Clubsport on Instagram, and I just knew that was the one I had to have! So after putting some money aside each month, and selling my old Fiesta ST, I finally found a Clubsport for sale at a car dealership fairly local to me. I bought it for a fair price with a few issues that I knew of… and I few I didn’t!

It turned out that it hadn’t been treated too well previously, so I’ve spent the past two years trying to resolve many issues and problems.” An ignominious start to E46 ownership perhaps, but Chris is nothing if not tenacious, and his quest to turn this Clubsport into the best possible example it can be has been thorough and unrelenting. Naturally there was the boot floor issue to attend to, as many an E46 owner will be able to relate to; a common weak spot, the subframe mountings can crack over time, which requires reinforcement plates to be welded in to repair the cracks and stop it happening further. Thankfully the crack in Chris’s car was caught early by his go-to guy, Mike at M.E. AutoServices in Orpington, and remedied to future-proof it. And this outlay encouraged Chris to pursue a purist and correct approach to restoring the BMW, using official parts wherever possible – right down to the nuts, bolts and bulbs. 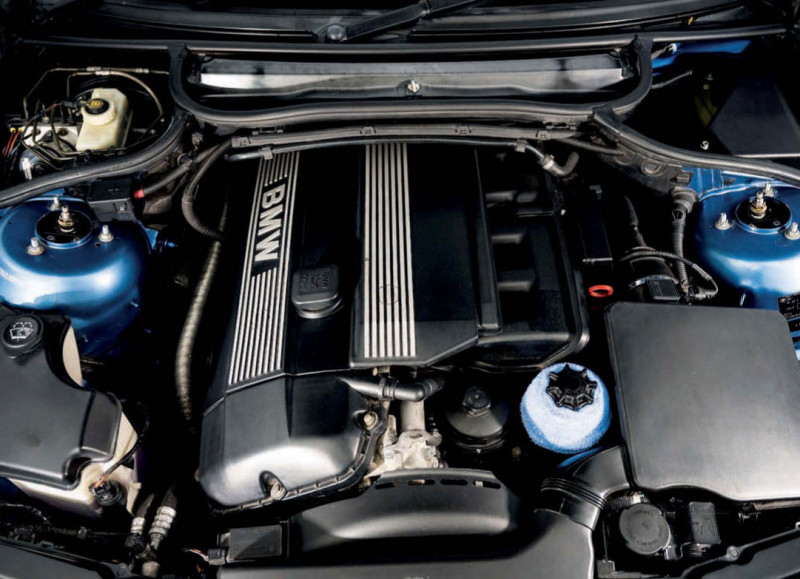 “This was all to ensure the longevity of the repairs and maintenance,” he explains. “To name a few of the more complex repairs after the rear subframe reinforcement plates, I’ve had the rear subframe and differential polybushed, brake hardlines replaced, DISA rebuilt, cooling system overhauled, CCV system replaced, intake system overhauled, new oil sump gasket, new window regulators, ECU remap, paint and dent removal… it’s been quite a journey.”

He’s not kidding. The commitment is admirable, and it’s important to remember that we’re seeing the car here at a stage whereby he’s still working through the to-do list; most of the big stuff has been done, but there’s still plenty more to do. Nevertheless, the Clubsport is at a stage today where Chris can really start properly enjoying it.

“A lot of this work was carried out by M.E. AutoServices,” he says. “Mike has been fantastic in resolving any mechanical issues with the Clubsport, and I would highly recommend him if you’re local to Orpington or the surrounding areas. There has also been a company called TyrePoint in Maidstone who have helped massively; they are experts in tyres, suspension and brakes, and John was my main point of contact and couldn’t have been more helpful. He was able to set up the coilovers as per my request, and then complete a full alignment to ensure that the car drove perfectly.”

That’s right, coilovers. Chris’s project has been focused on using OEM fundamentals wherever possible, but he’s also got a keen eye for a quality upgrade, to take this already enjoyable car and make it even better. It’s now running HSD DualTech fully adjustable coilovers and Prosport drop links, which have done a lot to tighten up the chassis and give it more of the track-ready Clubsport vibe it deserves, while drilled and grooved discs have been fitted and EBC pads will be added soon. “Tom at TJA Autos in Portsmouth helped with replacing all the brake lines,” Chris continues. “As a fellow Clubsport owner, he has a wealth of knowledge on these cars, and even ran late to a birthday meal to ensure I got my car back quickly! And I also have to mention DG Maps, who supplied the remapped ECU – this completely transformed the drivability of the Clubsport, and was a necessary item on the to-do list due to it having been badly remapped prior to when I took ownership.”

The more Chris tells us about the remedial works, the more it sounds like he’d bought a bit of a pup – although that wasn’t the case, it was more that this Clubsport hadn’t lived in the warm bosom of a cherished collection, but was simply an early-2000s car that had been treated like most early-2000s cars. There was stuff to do, and he’s being methodical in doing it. The wheels are another example: when he bought the Clubsport, it was wearing an incorrect set of BMW MV2 alloys. It’s taken a lengthy search, but he’s eventually managed to track down a set of the proper Style 71 design, which will be fitted for the summer with the MV2s serving winter duties. Cosmetic mods have been limited to the tasteful and appropriate, with a retrimmed steering wheel inside and some carbon splitters and gloss black kidneys on the nose; overall, it’s been more about ensuring everything is tip-top and ready for fun. “It has the factory 5-speed auto ’box,” Chris lets on, “but once all the maintenance work is complete I will most likely look to do a manual swap. I am trying to limit the miles I put on the car as much as possible, so I don’t use it to commute to work every day; hopefully with the weather turning a bit better I can get it out to a few more meets and enjoy the car as it should be driven! It does get quite a few compliments, which is always nice to hear. I think any car enthusiast appreciates when they hear positive feedback about the car they’ve worked on, so it’s always a good feeling when something like that happens.”

It’s particularly heartening when it happens with a car like this. Understated performance is the watchword here, and to most casual motorists this isn’t anything more noteworthy than a twenty-year-old BMW runabout. But to those who know what they’re looking at, those within the special secret club – yes, these still waters run very deep.

Overall, it’s been more about ensuring everything is tip-top and ready for fun

“My future plans for the Clubsport are to continue resolving any mechanical issues, such as rebuilding the VANOS unit, and refreshing a few more components,” Chris explains. “Once all of the mechanical gremlins are sorted, I’ll then start looking to finish off with fixing some stone-chips and car park dings. I really enjoy how the car looks so my goal is to keep it as OEM as possible, although my ultimate goal would be to supercharge it… but that’s very far down the line and a sizeable chunk of money! My Clubsport may not be the most powerful, most valuable or most pristine example out there, but I love it and I’ll continue to enjoy it for as long as I can. Going out for random drives and hearing the noise just gives me a smile from ear-to-ear which is an amazing feeling that I never really had from my previous cars.”