This modified 2002 can do it all: it’s a reliable daily, a manic track weapon, practical for the school run, a gleaming showstopper – but it’s hiding a surprise under the bonnet…

There are some things in this world that are so indescribably beautiful, so far outside the realms of conventional delectability, that we, as mere mortals, have little option but to stand and stare. Perhaps to reassess the priorities of our lives, shuffling them into ‘what I believed before I saw this particular thing’ and ‘what really matters now that everything’s changed’. The verdant rockiness of Machu Picchu. Michelangelo’s intricate works on the ceiling of the Sistine Chapel. The serpentine tree roots wrapped around Angkor Wat. And this BMW 2002. Sorry to gush, but it really is that good-looking, isn’t it? The world is a better place for the fact that it exists.

Thankfully, as fans of fast cars with little enamelled propellers on the noses, we can all rejoice in the fact that the looks are in fact secondary to the performance. You see, this sumptuous vision in 1970s artistry hides a secret – its soul may be Western, but its heart lies in the East.

But before we get into all that, let’s get the measure of the man behind it. Joe Priest is a fella who knows what he likes, and has the vision and tenacity to see it through; still only in his thirties, he’s enjoyed over a hundred cars, all tastefully modified, including a supercharged E92 with 625hp, a 740hp M4 and a carbon fibre 470hp Lotus 340R, as well as all manner of Japanese fare. His first car as a teenager was a VW Beetle with massive drag tyres on the back, and today the garage boasts a Noble M12 GTO-3, a Datsun 240Z, a track-day Renault Clio 172 and a highly modified Nissan Cube. So when we extract the key essence from these disparate affections, the 2002 you see before you makes a lot of sense: a desirable classic car, with modern sports car performance and reliability, infused with a flavour of the Orient. 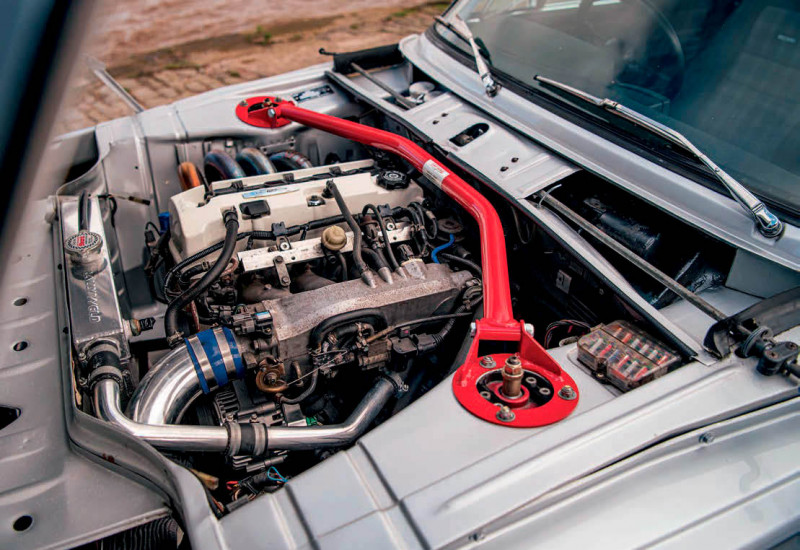 Why a 2002 specifically? Well, that’s an easy one for Joe to answer: “I wanted one for 20- years,” he laughs, “ever since seeing one at my local track, Llandow, running rings around modern machinery. I wanted something supercool which I could use for shows and track days, with a usable boot and most importantly back seats for my seven-year-old daughter. My wife and daughter come to most events with me; it is a family hobby, not a dad’s one.”

Naturally this isn’t the sort of car you’re going to find on every high street dealer forecourt, so he had a bit of a search on his hands. Joe ended up viewing four crusty 2002s before he happened upon this one – a low-owner car down on the south coast. “It was far from perfect, but it was straight,” he recalls. “Not rusty, and already modified well into the direction I wanted to take it. The seller was genuinely passionate about the car, having built it to compete in hillclimbs – but as happens a lot of the time, life got in the way. The biggest thing was that it already had the Honda engine; almost everything else has been changed since I bought it, but having the engine in place and working made it feel like it was meant to be.”

It’s certainly a compelling choice of motive power, offering some truly tantalising benefits. The S2000-sourced F20C engine was and is in very fine fettle, so this is the one element of the car that Joe hasn’t cracked open yet – but it’s fair to say that there isn’t an inch of the rest of the car that hasn’t received careful attention. Joe isn’t the type to just buy someone else’s project and roll it as-is; he has to make a car his own. And besides, he’d essentially mapped out what he’d want from a 2002 long before he actually bought one.

“The first job was the LSD and rear end geometry,” he says. “The car was great, but I like to go sideways as much as possible and it needed some adjustments to be how I wanted. Everything was dropped off the back end, updated, restored or replaced. Next I tackled the exhaust; I was originally planning to go turbo, but then I decided that the power-to-weight was just right so instead I opted for the work of art you see in the ‘bay today. Built by Luke at LA Fabrication up north, I booked a track day with some friends at Oulton Park, did the day, then had it collected on a lorry and taken up to him for the build. Transporting the car the length of the country was definitely worth it – not to mention that I love Oulton Park, so any excuse!”

The build was really coming together cohesively by this point, although there was still much to do before Joe would be fully happy with the overall package. Mapping was the next big thing on the to-do list; this was entrusted to Jesse at J.Cal ECU Calibration, a proper wizard with Honda engines, and he worked his magic to conjure a map that ensures it always starts and runs as reliably as a modern car should, averaging 30mpg on a run while also morphing into a totally different animal in the VTEC zone.

With the mechanicals being painstakingly sorted by all the right people, it made sense to pay similar attention to the aesthetics. The repaint was undertaken by a trusted friend, and since Joe is so particular about the details he was happy to wait five months to get it in the right hands, paying pernickety attention even to all the bits nobody would ever see. You think it looks good now? You should see it naked.

“The next thing was probably the first which wasn’t in the plan,” Joe continues. “One day I was jacking up the car on the chassis rail and I heard a horrible crunch, that noise any classic car hobby mechanic will know… it turned out that while the underside resto was generally good, when the chassis rails were prepped the drain holes were left blocked, and water made its way in with nowhere to escape and they had started to rot. My friends at Dowen Rally Services came and had a look, and told me to stop being so dramatic and it wasn’t that bad! Instead of patching, I got them to replace both rails end-to-end, plus adding in another 3mm of skid plate for good measure. Now I was happy. If it was original I would have wanted it to look original under there too, but as it isn’t we went to town – have I mentioned that the free rein on the mods is a big reason why I love this car so much?”

It’s certainly inspiring a magnificent level of creativity. Take the treatment of the interior: it took months to get all the parts together, but the fishnet Recaros were bought from a good friend, as was the rear bench which has been masterfully retrimmed by Sew Good Upholstery in the same rare retro VW fabric. And that leather-trimmed Momo Prototipo steering wheel? That’d be right at home in a Singer 911.

“I intentionally haven’t gone full show standard, because if I do I’d run the risk of not wanting to hang off people’s bumpers on track days, it’s been built to be used,” Joe reasons. Although perhaps his definition of ‘not show standard’ is somewhat different to the average person – it’s the attention to detail that really makes this BMW shine. Beautifully and intelligently crafted, and built to enjoy.

Oh, and it does get used. “I take it everywhere,” he grins. “The car does shows, track days, holidays… it does the shopping run, and I use it to take my daughter to school. My mission is to drive it as much as possible. Winter tends to be a bit slower for track days, but despite that it’s been to Oulton Park and Castle Combe a month either side of Christmas. This summer it should make its way to Spa and to the Nürburgring, taking in some mountain passes for good measure.

We’re also booked to do the NC500 in September, and again I have every intention to use the 2002. If I don’t do more than 6,000- miles a year in it, I will be disappointed.” This ethos is admirable, and it’s clear to see that after a couple of decades of yearning, Joe has fallen head-over-heels for this joyful old Beemer. His motoring history suggests that he does tend to chop and change, but this car is very much sticking around for the long haul. It ticks a lot of boxes, a sublime fusion of form and function. “In my opinion, it’s the coolest car in the car park,” he says, and it’s hard to disagree. “It is modified to hell, making it better than any original 2002, and has the reliability of a Honda. It replaced my 720hp M4 and, despite that having the ultimate specifcation and being three times the power, I love the little 2002 thirty times as much.”

It’s a wonderful tale of dreams fulfilled. There will most likely be further developments to the car (follow him on Instagram via @madda_joe), but they’ll all be on merit. This isn’t a car built to feature the perceived ‘correct’ parts or to appease the concours judges; this is an eminently usable machine that does everything its owner wants and needs it to – ideally with the smiling family on board and a fresh adventure just beyond the horizon.

Honda’s F20C engine, as found in the S2000 roadster, has become a modern icon with good reason. The 2.0-litre four-pot boasts twin cams with variable timing and lift on both intake and exhaust (essentially, a manic warp-speed second cam profile that kicks in above 6,000rpm), forged pistons with molybdenum disulfide-coated skirts, and all sorts of other race-car tech. Indeed, the F20C held the record for a while for ‘highest specific power output for a mass-produced, naturally aspirated engine’, the motor offering 237hp at 8,300rpm in stock form, with the redline at a howling 9,200rpm. In this BMW, with it intelligent tweaks, it’s a thrilling formula indeed.

“I also quite enjoy opening the bonnet at the right time at shows,” says Joe. “Usually when someone older has spent twenty minutes educating the people nearby on how it is a piece of motoring history and it being so nice to see such a well-cared for original example, I’ll open the bonnet and enjoy the back-tracking! For the informed, it’s very obvious it’s not original – Turbos never came in right-hand-drive…”

“The next thing was probably the first which wasn’t in the plan...”

I thought the Honda S2000-powered 2002 featured was great – what a breath of fresh air to see a modified classic BMW with a totally different twist on it. I have driven cars with those Honda VTEC engines inside and I have to say that they’re totally addictive – chasing the redline is so much fun and I bet that S2000 engine really makes that 2002 fun to drive. I’m all for beautifully restored, original, classic BMWs but every once in a while it’s nice to see something that breaks the mould, a car that might upset the purists but which expresses some real personality.

I had to write in to express my dismay at the 2002, seeing such a classic BMW ruined with the addition of a Honda engine is just plain wrong. With so many amazing BMW engines available to choose from why would you opt for a Japanese engine? And one that requires you to drive it flat-out to get the best out of it too. That kind of engine doesn’t suit a car like a 2002 in my opinion.