Much of Alan Faulkner-Stevens’ work centres around the full restoration of the many Shelby Mustang variants. From time to time he’ll diversify with the occasional other muscle car and, of course, another of his specialities is genuine AC Cobras and their derivatives. 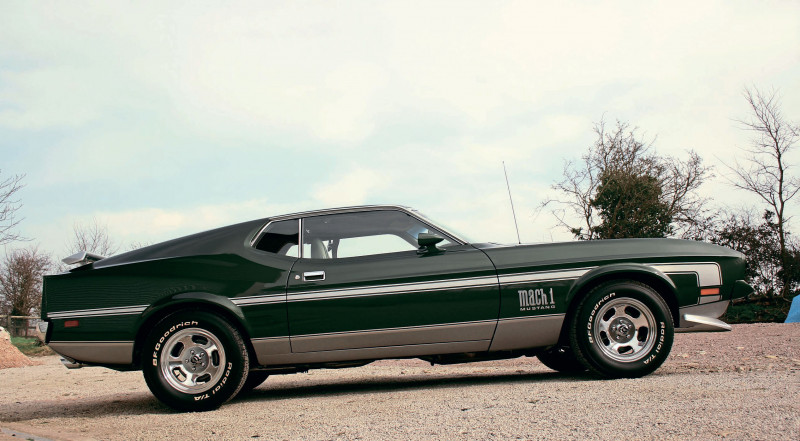 However, one particular car to benefit from Alan’s expert attention has been this 1971 Mustang Mach 1, whose now-former owner was looking for something special. “He would find cars on various websites, send all the information to me and we’d discuss the pros and cons of them,” explains Alan.

“THE CAR HAD BEEN RESTORED TO A VERY HIGH STANDARD AND SINCE THEN I DON’T THINK IT HAS SEEN A GREAT DEAL OF USE, BUT THERE WERE SOME AREAS THAT WEREN’T TOUCHED; THE WIRING AND INTERIOR TRIM BEING TWO OF THEM...”

“We came close once or twice to finding what was thought to be a suitable car, but in the end they didn’t meet the criteria. Then one day I was surfing the net and was looking on eBay Motors in the States and up pops a dark green 1971 Mach 1 which was located in a remote area of Virginia.” 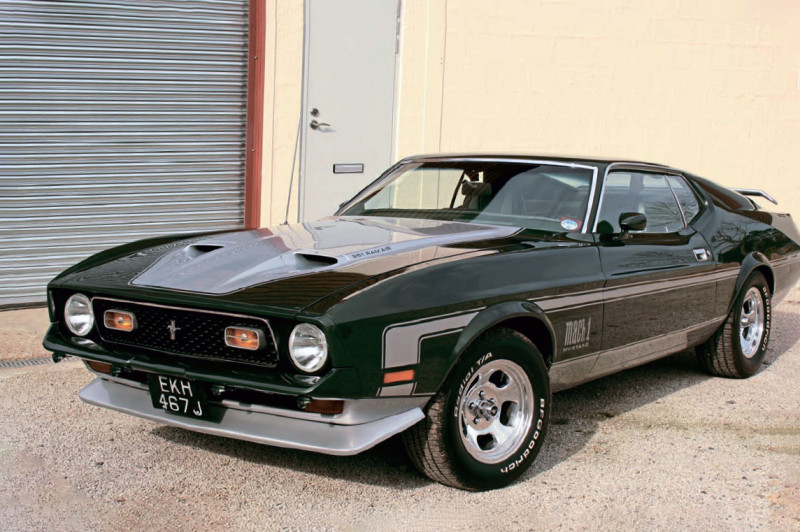 The vendor in the US also owned a Shelby Mustang. He’d just lost his job and, unfortunately, one of his cars simply had to be sold, so he decided to keep the Shelby and part with the Mach 1. Alan telephoned him, had a long chat about the car and thought, ‘Eureka, this could be the one!’

Alan explains: “I contacted my client, and suggested to him this Mach 1 should be seriously considered. A short while later I received an email informing me he’d purchased the car, and please could I get it to England.” 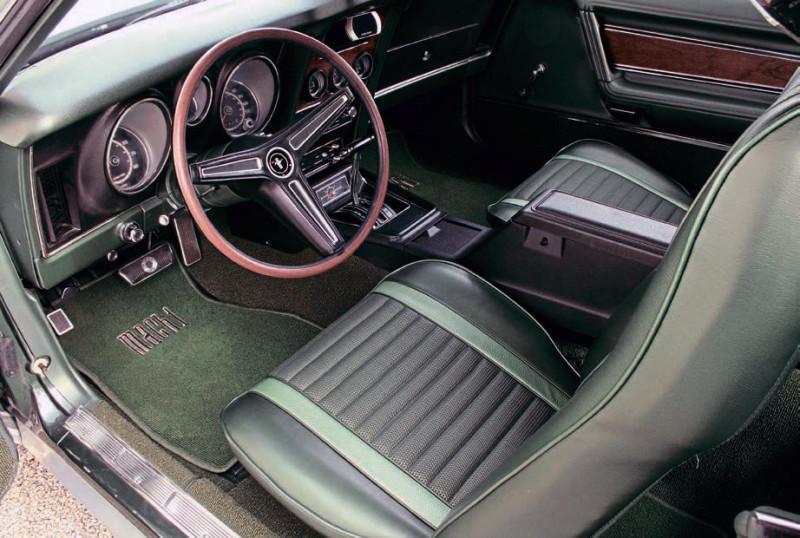 Dragon Wheels is based a few miles outside Newport Pagnell in Buckinghamshire and part of its remit is the sourcing, locating and transportation of cars back to the UK, so a plan of action was begun.

Alan decided to entrust Reliable Carriers Inc, specialists in classic/vintage/race-car movements, to transport the Mach 1 from Virginia to the docks at New York.

With the Mach 1’s remote location, as previously mentioned, collection took two or three weeks before Reliable had a passing truck. “They offered a great service and at a most reasonable price too,” says Alan. “The car eventually arrived at my workshop.” 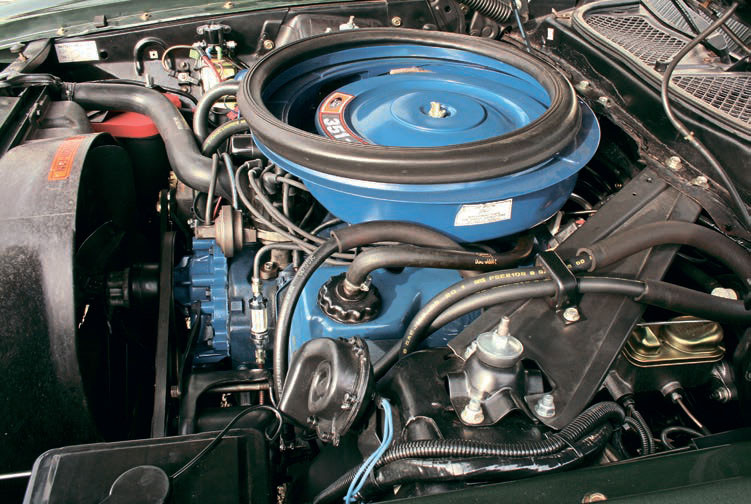 The full history of the Mach 1 shows that it was purchased brand-new for $3512, including options, by a US Navy fighter pilot who saw active service during the Korean War. It was built on January 6, 1971, and delivered to Uhlmann Motors Inc, Chehalis, Washington state. Interestingly, the company is still a Ford dealer to this day. The original build and purchase sheets have fortunately survived, along with several photographs with the owner sitting at the wheel. He previously owned a 1966 Shelby GT350 Hertz Renta Racer but, alas, he kept getting busted for speeding in it.

So, he thought if he purchased the more docile Mach 1, it might calm things down a little, so the Shelby got traded in for the Mach 1.

In theory, the Mach 1 offered plenty of cruising performance with a 351cu in Cleveland engine, four-barrel carburettor, a C6 three-speed automatic transmission, and a 3:25:1 axle ratio. After the pilot drove the car home, he immediately returned it to the dealer informing him: “This car simply isn’t fast enough”! The dealer subsequently fitted an uprated camshaft, headers, and applied various other tweaks, and the pilot subsequently ran the car for the rest of his life. That is, until he succumbed to Alzheimers at an elderly age and the car was then parked up.

Eventually, the Mach 1 was purchased by a former president of the Mustang Club of America and, because it was such an authentic one-owner car, he undertook a comprehensive restoration which took nine years to complete. It is believed that during the restoration the engine was returned to a more stock set-up and the headers were replaced in favour of cast-iron manifolds. The car can be seen on a YouTube clip being driven by former Guns ‘n’ Roses bass player Duff McKagan on a music track featuring his band Loaded and he appears to be having great fun, hooning around and smoking up the rear tyres. “The car had been restored to a very high standard and since then I don’t think it has seen a great deal of use, but there were some areas that weren’t touched; the wiring and interior trim being two of them,” explains Alan.

“The plan was to take the car to the next level, to make a great car even better, making it crisper and sharper, with the emphasis on highly detailed improvements rather than restoration. The ultimate aim was to finish up with a car that would look to all intents and purposes very close to showroom condition, but without going over the top.

“Both front and rear suspension assemblies were removed and mostly rebuilt, detailed, and powder-coated for longevity, along with the brakes, fitment of new bearings in the diff, service the gearbox and engine, fit electronic ignition and a new wiring loom, and the lights were converted to UK specification.” Bodily, the car was in excellent shape; the dark green metallic paintwork still in fine order, though a little ‘orange-peely’ in places, but the silver on the bonnet, which was originally satin, had been polished and was a mixture of matt and gloss and needed sorting. The solution was to flat the entire car using Super Fine 2000, followed by machine polishing, which lifted the paint back to life again. The silver on the bonnet and chin spoiler were repainted in gloss, making it stand out more. The silver-stripe kit, applied when the car was restored, was retained. The rear bumper was rechromed and a parking sensor kit was fitted front and rear as allround visibility was never one of the Mach 1’s most notable features.

Due to scratches, the side windows and rear screen were replaced with new glass which was specially made and all correctly date-coded. The brightwork trim around the windows was mostly pretty much all in good shape, although the gutter trim was less so. Therefore, with replacements unavailable, it was deemed appropriate to paint them silver.

The stainless-steel trim around the back window was chromed to make perfect, and then windscreen sealant was applied around the edges to prevent water ingress. It’s this kind of exacting detailing that most folk wouldn’t even notice. Another thing that is often overlooked is replacing the exterior door handles which often become very pitted, but fortunately NOS handles were sourced and fitted.

While the car’s interior green trim was all-original, it was naturally showing signs of wear and tear, so it was decided to really freshen things up inside. Replacing the very rare option of Corinthian three-tone green seat covers, door cards and carpet set did present a big challenge as nothing was available off the shelf. However, undaunted, Alan contacted a company in the States which purchases all the NOS seat-cover material.

“I sent them samples of the original trim colours and subsequently bought three 2¾-yard lengths of the correct colour NOS seat material, which is believed to be the last known available in the world. The metal seat frames were all sandblasted and powder-coated, and making new the seat covers and fitting new foam innards was entrusted to my trimmer, an ex-Rolls- Royce/Wood & Pickett man. At the same time, all the brightwork on the rear seat assembly was rechromed, black door cards were purchased and painted with a specially colour-matched green vinyl paint, and all the hard trim was repainted too. When it came to replacing the carpet set, it was impossible to obtain the correct original shade of green, so we’ve gone for the closest possible to the original. The rather plain two-spoke steering wheel was split in places and wasn’t perfect, so I managed to obtain an optional Rimblow three-spoke wheel which has a faux-wooden rim. To sound the horn, you merely push the inner section of the rim, hence its name Rimblow. This was a NOS item and cost a small fortune, but it does really look the part.”

While the original wheels and tyres came with the car, it was decided to retain the Ansen Sprint mag-alloy wheels already fitted, which are an American 1970s period fitment and very similar to our Wolfrace slot mag wheel. Following an impressive refurbishment, the Mach 1 really does represent an incredibly clean and sharp example with a fine provenance.

The car has since changed hands again, but one thing that does remain is that it must surely be one of the finest examples to reside in the UK.

Original build sheet. Delivery broadcast sheet. Pictures of the Mustang… …with its first owner, a US Naval pilot.