The Fiat X1/9 is turning 50 but its philosophy still feels fresh. We try an early 1300 for size to the cutprice, mid-engined trailblazer’s legacy today.

How Fiat’s X1/9 brought supercar engineering to the masses

The engine note hardens to a tight tenor as the 1978 Fiat X1/9 Lido pulls towards 5000rpm. I glance at the Veglia rev-counter and watch its chunky needle climb another thousand revolutions to peak power. Inches behind my head, close enough to touch, the Fiat 128-sourced engine shifts to a biting, intake-led bark, swelling against my right ear and urging me not to lift out now. The four-spoke steering wheel bobs between my wrists, the road rushes up the blunt bonnet to strike the lowset driving position between the eyes. It’s the classic Italian supercar experience distilled. Until I look at the speedometer. 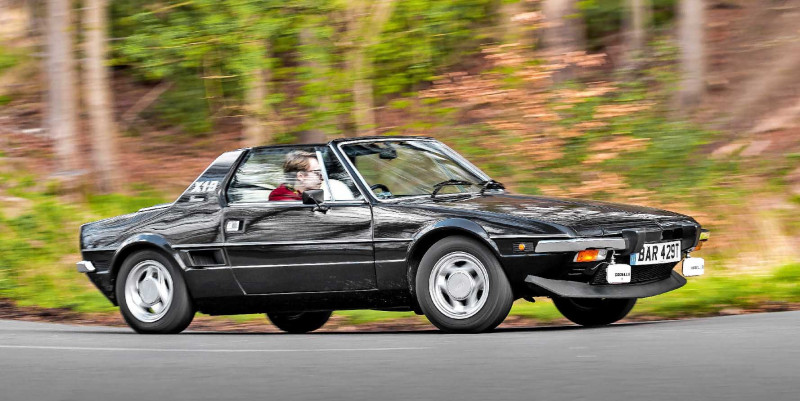 We’re travelling just below 40mph, comfortably inside the speed limit of this semi-rural Hertfordshire road. The transverse four-cylinder mounted backpack-like against my shoulders displaces only 1290cc, enough for 74bhp and 72lb ft, powering this 1300 model to 60mph in 11.8sec and yielding at 106mph. Fiat’s baby convertible is no rip-snorting animal. But, in its golden anniversary year, the X1/9 remains revolutionary. A midengined monocoque styled by Bertone, it rocked the affordable sports car market and created waves that ripple to this day. 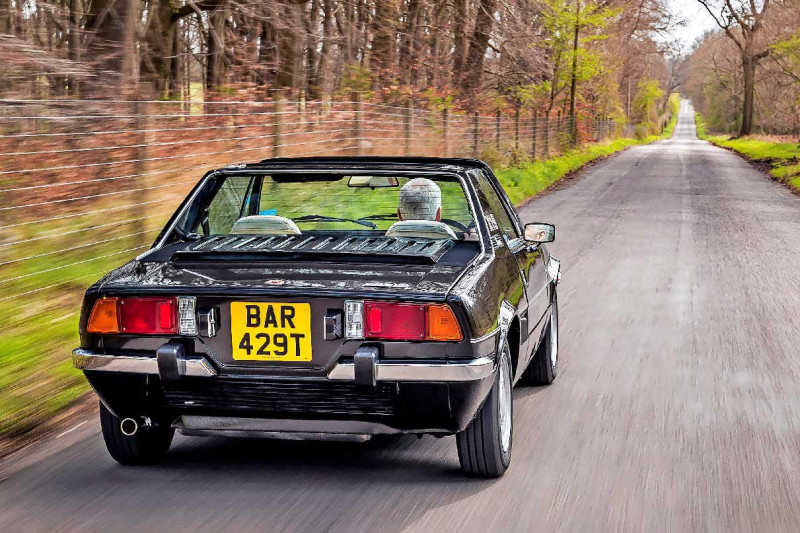 The mid-mounted revolution wouldn’t come from inside Fiat. As the rear-engine, rear-drive 850 began to age, corporate development shifted to the front-engine, front-drive 127, spelling extinction for the sporty 850 Coupé and Spider variants. But Spider body constructor Bertone wouldn’t go down without a fight, developing a shared-edged prototype that slung a transverse Fiat Group engine right behind the driver.

‘The accelerator rewards with granular power delivery and ramping brio’

Rocking a pioneering wedge shape by Lamborghini Miura stylist Marcello Gandini, the resulting 1969 Autobianchi A112 Runabout sent a bold statement of intent, underpinned by production-ready mechanical thinking. Bertone had lifted its running gear from the Autobianchi Primula, a small family car that took packaging inspiration from the Mini but junked the Brit’s shared oil reservoir for separate engine and gearbox sumps. Dante Giacosa’s design improved refinement and accessibility, but the Runabout revelled in a fringe benefit: the Primula driveline could be easily reconfigured. 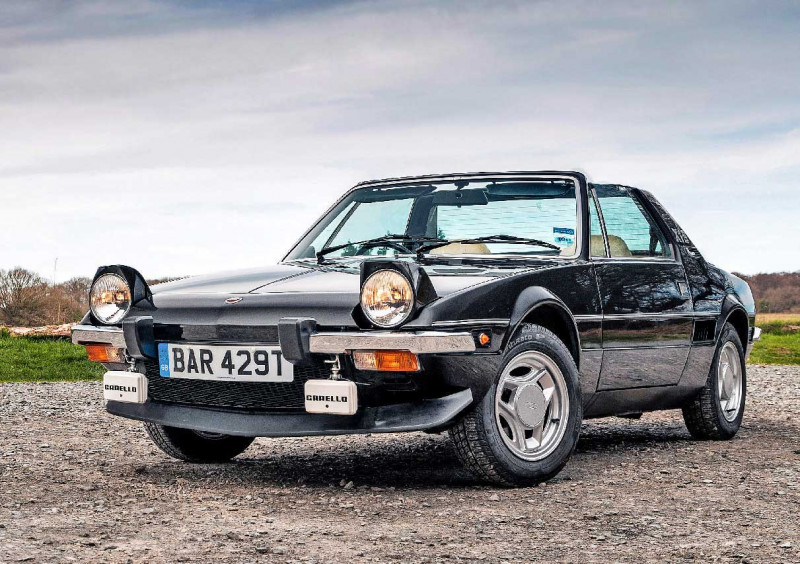 Supercar looks with supermini parts should have been a slam dunk but Fiat’s response was tepid. It didn’t matter. Development continued apace, the project soon splintering into the Lancia Stratos and Fiat X1/9. Head office slowly warmed and by November 1972 the productionised X1/9 was ready for its world debut. Key elements including the pointed nose and integral roll-over hoop survived in the revised Gandini shape, with power now from the newer Fiat 128 sohc inline-four.

Press drives came before the model’s public debut. Fiat was afraid the new sports car would overshadow the debuting 126 at the 1972 Turin Auto Show, and it’s not hard to see why. Gandini had been prolifically busy since the Runabout prototype broke cover, applying the same wedge design principles to Lamborghinis Countach and Urraco, plus the increasingly refined Stratos HF concept. The X1/9 was the everyman’s entry in the latest design vanguard, looking unique at its price point. Crisp yet boldly inorganic, the shape still intoxicates today.

The X1/9 looks better still once I’ve stowed the vinyl roof panel, and beckons me to start driving. Yet the open air won’t dominate my first impressions. With the windows up and the upright rear glazing tight against the back of my head, the Fiat barely tousles my hair as I amble up to cruising speed. Countryside scents and sounds flood into the interior, intermingling with the straightfour’s bassy exhaust hum under low load, without my ensconced driving position ever falling prey to gusts or side winds. 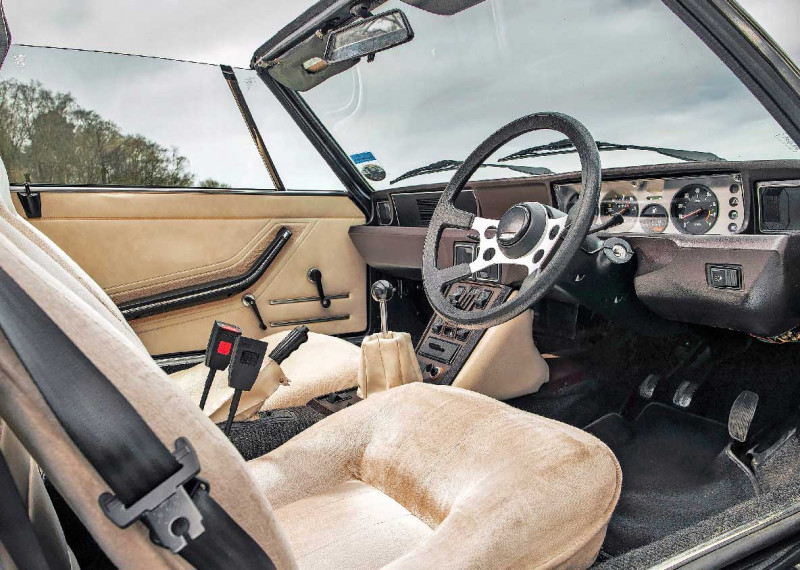 Shielded from the elements, I can appreciate the feedback pattering through each one of the major controls. Again, it’s the steering wheel that stands out above all, immediately underlining the unique tactility created by trimming kerbweight and placing the engine aft of the driver. Even when stationary, I can twist the unassisted rack-and-pinion between lockstops without meeting resistance or straining my arms, and what little weight does exist starts to fall away at urban speeds. By 20mph I’m steering from my wrists. Raise the speed by the same again and the wheel floats in light, uncorrupted yet direct sweeps. Down in the close-set footwell, my toes dance with the same delicacy, the accelerator rewarding with granular power delivery and ramping brio. All it takes is a brush through a brief initial dead zone and I can play the 1290cc engine by ear, feeling the surges at 3000 and 5000rpm that give way to a breathy, still precise response when the needle passes six. Flick the throttle into the last third of its travel – no matter where the Aurelio Lampredi engine sits in its powerband – and the soundscape hardens with a thick, insistent undertone.

And the pedals are light, all three of them. The clutch must run to its stop before the gearlever frees itself and the unassisted brakes demand a show of faith before they’ll process smaller applications but grit, weight and resistance are absent. They’re a tactile delight – but only if you can find the right driving position to access them. Archetypally Italian, echoing the contortionism demanded by a Dino or BB Ferrari, the X1/9 jack-knifes my knees back against the wheel while forcing my arms to stretch for the rim. The straight legged, close-wheel tradition embraced by Triumph or MG couldn’t be a greater contrast.

The conceptual gap between the Italian car and its more conventional competitors only grows as the road tumbles into horseshoes and tightening, right-angled bends. A Triumph TR6 or MGB would need a firm hand through these turns and offer a settled, gentle front end in return, their lightly-laden rears skipping over bumps. Cornering the Fiat is an almost opposite affair. I jink the wheel towards an apex and the car turns with near-instant fluidity and little body roll, the steering rack gently escalating weight as the forces build. 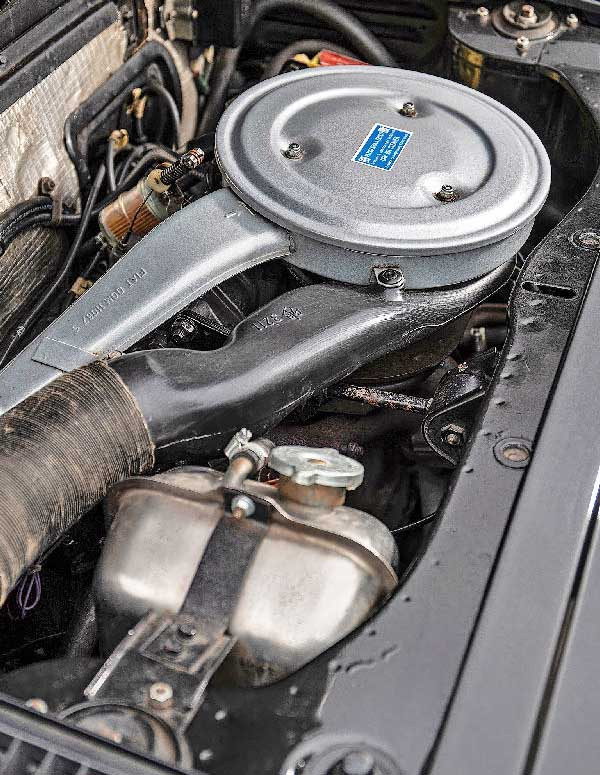 An eager 3.1 turns lock-to-lock gets the Fiat into the turn quickly but the fun doesn’t stop there. Rising forces simmer the previously fluid steering messages into tight, eager yet still flowing feedback that imprints the road surface between my palms, laying out the corner as a series of options. I can hold course, trim the throttle to find a keener front end or even tighten the steering angle, the last choice facilitated by the flyweight 470kg that sit over the front wheels, ensuring the wheel is always light enough to turn and the chassis ready to respond. I can feel the fly-eating smile crack across my face as the X1/9 carves down the hill, through the tree line, each corner an act of artistic expression over proscribed technique. So I turn around and charge uphill this time, mindful that the sophisticated rear suspension is providing my ample safety net. The combination of MacPherson struts and coil springs offers rigidity and control decades ahead of competitors’ live axles and semi-trailing arms, helping the 165-section tyres find unimpeachable grip.

Chamfered messages telegraph through the seatback as my speed and confidence grows, the set up handling enthusiastic inputs, cambers and potholes with loose-limbed security. Capable and cost-effective in equal measure, the MacPherson system was a stroke of engineering-conscious genius. Lifted in its entirety from the front of a Fiat 128, it was already in production and guaranteed to fit the X1/9 driveline, making the new sports car easier and cheaper to produce. Fellow carmakers eventually took note when Pontiac repeated the same trick with its Phoenix to create the Fiero, Longbridge mounted Metro components in the back of the MG and Toyota used a proprietary assembly to suspend its MR2.

It wasn’t enough to make the X1/9 a genuinely cheap car. Though continental European sales started soon after the late 1972 launch, it took until 1977 for the factory to develop a righthand- drive variant and launch it in Britain, with a list price that just squeaked under £3000. Midgets and Spitfires were cheaper; MGBs and TR7s substantially faster. The Fiat was outgunned.

Acceleration slows to naught when climbing hills below 3000rpm and – though lengthened over its 128 donor – fourth gear is abrasively high-revving at speed.

Fiat fixed those problems with the 1979 introduction of the 1500, a mid-life update named for its larger 1498cc engine. Power shot up to 85bhp and torque to 87lb ft, driving through a five-speed gearbox. Coupled with a 10mm ride height raise and full-width impact bumpers, plus a 34kg bump in weight, the new model injected civility by straying slightly from its sporty brief. No doubt it’s the better car for longer trips but I’m installed in a 1300, so I dive down to a side road to go off in search of more fun.

First I have to tackle the gearbox. Lifted from the donor saloon with only minor tweaks and hooked to the round-topped shifter through a flexible linkage, the H-pattern exhibits the same vagueness as mid-engined contemporaries like the Lotus Esprit. Rush a shift and the feedback evaporates into quicksand ooze; force the lever and it baulks with stubbornness. All I can do is relax, pausing the lever in the neutral plane before guiding it to the end of its short movement, weight swelling in response as the ratio engages. Second gear and 3000 revs on the tacho, an empty straight up ahead. I push the throttle to the floor and hear the exhaust burble sharpen, then give way to a clean, hard engine bay tenor that leaves space beneath for chattering valvetrain and the subtlest transmission whine, then melds into a crisp, urgent intake before arriving at a breathy clamour. I shift and do the same all over again, without reaching the speed limit.

Peering through the panoramic span of a tall, gently arcing windscreen, engine singing fit to burst as it just keeps revving, steering swaying light and feelsome to communicate a softsprung yet secure chassis, it strikes me that I’ve had this drive twice before. Once in a Toyota MR2 MkIII and once in a Lotus Elise S1: two spiritual successors that can trace their mechanical layouts, philosophies and sheer brio back to the X1/9. Five decades ago, Fiat struck gold that still retains its lustre. A production run of 17 years and 160,000 cars proved public interest in a massmarket middie, setting the stage for others to start their own decades-long production runs. The Italian was never as popular as its more conventional, front-engined competitors but an icon isn’t always formed by consensus. Stylish yet technically innovative, dramatic but oh so much fun, the X1/9 is the little league supercar that strikes a blow for the non-conformist.

Neal Gibbons is the proud owner of this 1978 X1/9 Lido. ‘I’ve wanted a Lido ever since I saw one in period. I found mine online in 2018 and haggled the price down from £16,000 to £13,000, by dint of it needing a lot of mechanical work. Since then I’ve refreshed the running gear and brakes, reset the alignment and replaced the sports exhaust with an OEM unit. The new system cost £300 – I sourced the manifold from Italy. Rust and weak synchromesh can be issues but the engine is superb and unburstable, though my 1500 has noticeably more torque.

‘Parts availability is good, with specialists like Eurosport (UK) and D G Rally. And I’d recommend the X1/9 Owners’ Club. They’re great, helpful guys and our last national event saw 24 Fiats tackle the Brecon Beacons! Driving is the best part of ownership, it’s just so much fun. There’s nothing else like it out there for the money.’