When he was planning this E34 build, James Cook knew just what he wanted: clean, subtle, flawless…

James Cook (@i_like_bmws) is a man with a clear idea of what he likes and the way things should be. “I’d wanted an E34 for a while,” he says. “After driving my E91 330d for three years, I was keen to be back in a classic, but I wanted to build a full show car that I didn’t have to use every day, meaning I could make something extremely clean. And the E34 is my favourite shape of BMW; I remember when I was younger, my uncle taking me out in his black 520i with tan leather interior, the hide burning my legs in the summer – I loved how it looked and sounded. And today, you don’t see many E34s on the road, and I like the rarity. I believe it’s a very underrated model, everyone knows of the M5 being ‘the last hand-built M car’, but I think people forget about the others.”

Having been passionate about cars since he was a kid, James took the plunge with his first BMW purchase when he reached 21 – an E36 328i, a car that he was inspired to try after having seen a few around at shows while he was dabbling in the water-cooled VW scene. He’d started out with a Mk4 Golf that enjoyed a few basic mods before levelling up to a B5.5 Passat, which he describes as his first real modified build, fitting air suspension himself on his parents’ gravel driveway and then driving it to Wörthersee. BMWs had always seemed out of his price range, but the £800 E36 changed all that. 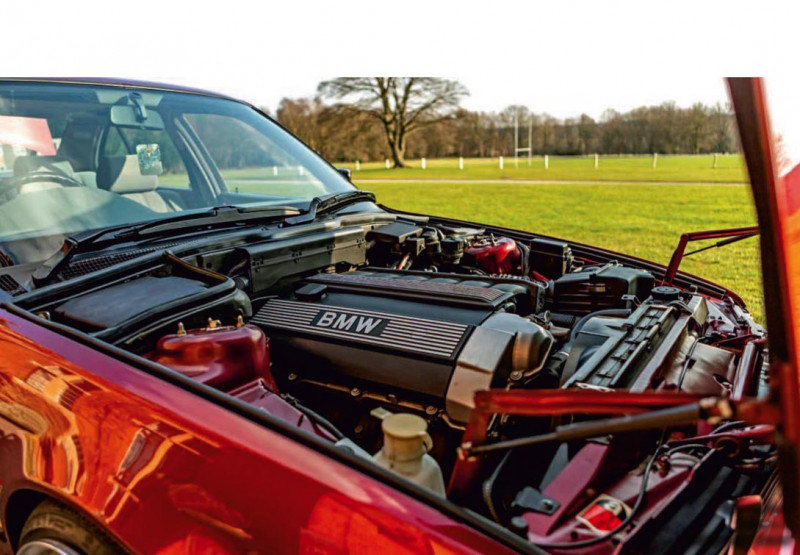 “I fell in love with the six-cylinder sound, the styling of it, and just how good it felt,” he recalls. “Going from a more modern car back into an older model taught me a lot about cars – mostly how to fix them, but the simplicity of the older stuff is so much better. I followed the same kind of route with that car as I did with the VWs; Euro look, ridiculously low, wide three-piece splits, but I went for the stance/race car look, carbon fibre wing, bucket seats, harnesses. The car never saw a track, but it looked rapid stood still… I also fitted a straight-through exhaust, which I would not recommend! All straight-sixes sound much better with some silencers. My hearing is significantly worse after driving that car to Austria!” The aforementioned E91 is, in essence, the daily driver, which nowadays spends much of its time taking rubble to the tip, although it’s still received the treatment: air-ride, OZ Mito splits, some aesthetics and a remap. But the E34 was always the dream car.

“I looked at a few, but most were not what they were advertised to be,” says James. “Rotten arches and sills, rough paint, dodgy repairs. After a year of looking, I came across this one on Car & Classic, only 20 miles from my house. I spoke to the owner on the phone and went to view it, and when I turned the corner to his house and saw the car on the drive, I knew straight away I was taking it home. It had been purchased new from Doncaster Stratstone BMW in 1993 and used daily for around 10 years by the original owner who was a doctor and commuted less than five miles to his practice. He then gave the car to his son, Andy, who I bought it from.

“Andy used it for special occasions and on the weekends through summertime; he did this for 15 years, keeping it in storage when not in use and never driving it through winter. Fortunately for me, he decided to sell the car as he didn’t have much time for it anymore. I bought it in June 2018, with 52k on the clock, full history with every receipt, full service book, original stereo, dealer plates and show plates as the car was used for BMW’s 100th anniversary at Wakefield Sandal BMW in 2016,” smiles James.

Well, they do say it’s always advisable to start your project with the best possible base, and it really would be hard to find a more honest E34 than this one. A late pre-facelift small-kidney model with the M50 motor, this Calypso red 525i was positively oozing with ’90s charm. Such a good car, then, that he was in two minds about modifying it?

“No, I had a clear plan from the start,” James smiles. “I wanted a clean OEM+ car, perfect paint, sat low, dished three-piece wheels. I wanted it to look as if it could have rolled off the factory floor like this, with subtle styling changes but all-round a ‘perfect’ version of the E34. Some may argue with that point, but I think it looks perfect! Air suspension was the only way to achieve the look I wanted and still allow for the usability and ability to look after it (as static cars do not last underneath); I didn’t want anything too shouty, I like the understated subtle styling. Less is more, especially for a car that looks so good already,” he says. 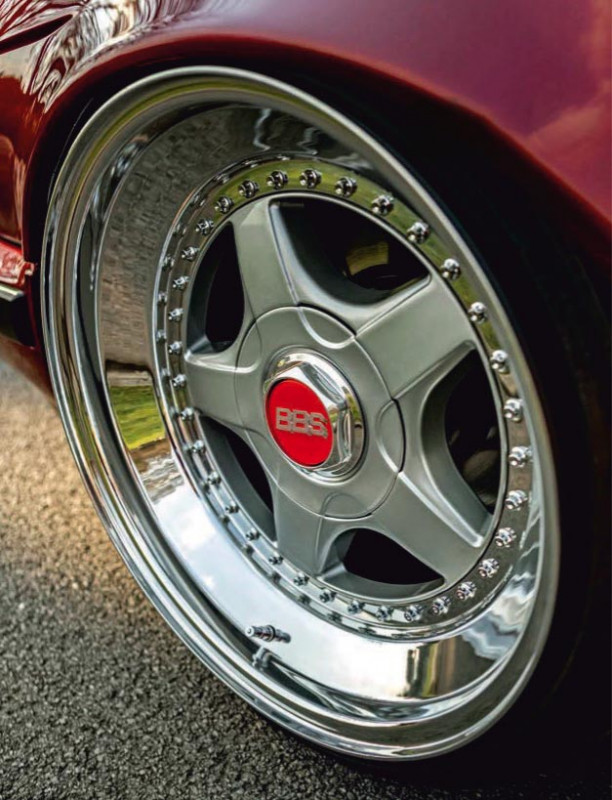 So this was to be a sympathetic makeover, celebrating the E34’s originality and enhancing rather than throwing all of that love and care away. James’s plan was to allow the car to fulfil its lifelong potential, and he knew just how to do that. The air suspension was the first job on the list, with the install entrusted to the artisans at Only Charged Dubs using BAGS Suspension with Air Lift 3P management, seamless tanks and hardlines. The underside received a refresh when the suspension was installed, with all-new arms and liberal powder coating to ensure that it remains as clean as the body. And with all that taken care of, it was time to address the one thing that had been almost boiling over from the start: the wheels. Because James is a wheel man, you see, it borders on obsession, and a heck of a lot of thought went into the rolling stock. “I’ve owned a fair few sets of split-rims, I love a good wheel,” he laughs. “When I bought the car, I had some OZ Mitos which I thought would suit it well, but when I fitted them, I didn’t like how they looked.

In my mind, there were only two sets of wheels I wanted for the E34, which I had never owned. These were either BBS RFs or OZ Breytons. 5x120 split-rims are difficult to come by, and I looked for a long time; I sold the Mitos and, by pure luck, the same day a set of BBS RFs came up for sale locally to me. They were true 5x120 fitment, RF 010, stepped up from 17s to 18s, however they needed some love. I purchased the wheels and stripped them straight down, dropping the faces off to be painted Porsche silver. The lips and hexes went for repolishing, and the barrels powder-coated black, and once completed, I built them up and finished them off with some new-old-stock red BBS badges. Within the last year, I’ve also bought a set of Breytons to complete my perfect wheel setup – these are slightly wider than the BBSs but with different ETs so they fit the same… Always good to have choice! You can never have too many wheels.” 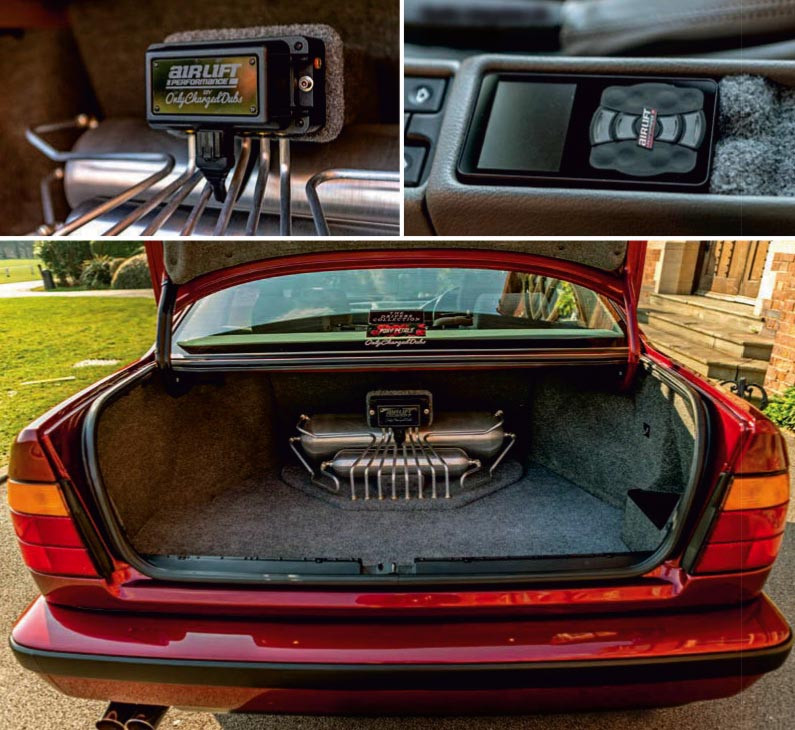 What really characterises James’s painstaking build is the amount of work that’s gone on behind the scenes. The body, once perfected and freed from any signs of age-related marks, has been fully repainted in its factory-original shade of Calypso red, with the boot artfully smoothed and the rear arches flattened inside to allow for tighter wheel fitment. All of the external trims and seals have been replaced with genuine new items from BMW. Pretty much everything aside from the lights and kidney grilles has been renewed. That’s what really hooks you in at first glance – it’s all in the details, and they add up to a genuinely newlooking whole.

“The factory colour is fantastic, the way it changes in sunlight from dark to light, I love it,” says James. “We went with water-based paint over solvent, and the paint code calls for a lot of pearl in the mix – so the fresh paint really does pop in the light. And I always knew the plan for the exterior styling, but getting from idea to completion took around six months once the work had started, due to timings and waiting for available dates. A few body shops locally had lead times of over two years, but luckily I managed to get it done sooner than that.”

It’s been a similar story with the interior, the factory look having been retained throughout with the modern additions crafted with appropriate sympathy. Up front, you’ll spot a neatly integrated Air Lift controller with everything else feeling pure early-’90s. Open the boot and you’ll find a very tastefully assembled air install with precisely ordered hardlines; OEM carpet was used to complete the look, with the manifold on show and the compressors and wiring hidden in the spare wheel well.

And in terms of the drivetrain, with such low mileage and proven history, the engine and gearbox were doing just what they should, so James has left them alone. Naturally, he’s renewed all sorts of trims and fixings to make it look new, and a custom stainless exhaust system has been crafted by Top Gear Performance to better fill out the valance and release a little musicality.

“Everything had to be perfect before I took the car to its first show,” he explains. “I brought it out in May 2021, went to a local ice cream shop, parked up, aired out, and looked at it for about two hours. It was the best day.”

So, is it finished? “Oh no, there’s always more you can do,” James smiles. “I’d like to trim the door cards and parcel shelf to match the OEM grey cloth on the seats, and maybe find some period-correct Recaros – if I can find a nice-looking set to suit a four-door I would retrim them in OEM cloth. And obviously, I’ll need to buy all the wheels! But really I’m just planning to enjoy it now – the car is 29 years old, but the shape is timeless, it drives as good as any modern car, I would happily drive this car anywhere and back without thinking about it. I think the E34 is the perfect useable classic.” He’s not wrong. And with the quality and period-perfect finish of this 525i, he’ll be rolling everywhere like it’s 1993.

Classic-looking head unit is actually a modern Blaupunkt offering. Stunning BBS RFs have been stepped up from 17” to 18. Original seats are in exceptional condition.

I wanted to build a full show car that I didn’t have to use every day, meaning I could make something extremely clean. And the E34 is my favourite shape of BMW”