The 997.1 was the last Turbo that could trace its origins to the original 930, and makes for a great-value buy today. Total 911 presents everything you need to know about it… Written by Kieron Fennelly. Photography by Damian Blades.

The first-generation 997 inherited its engines from the 996. However, from the outset in 1999, for the first time since the original 930 the 911 Turbo did not use a blown version of the naturally aspirated 911 flat six, but what was almost a bespoke engine. Porsche’s engineers knew the M96 of the 996 would not be suitable for circuit racing as oil starvation occurred above lateral forces of 0.7g, speeds readily attained with competition tyres.

Yet a production 911 that could not go racing was unthinkable. The Motorsport department thus developed a specific engine for GT3 competition. This was a hybrid unit which took the seven-bearing alloy crankcase of the 964-993 and used a water-cooled head which was derived from the 959 and the GT1. 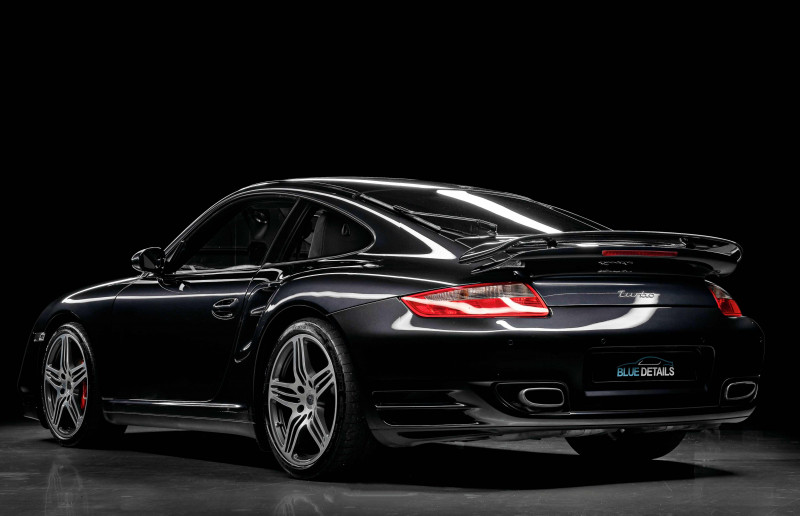 Making generous use of Nikasil, titanium and expensive aluminium alloys, Porsche could not hope to recover the cost of this engine through its GT3 programme, but realised the cost could be amortised by making this engine the basis of the forthcoming 996 Turbo. For the 997.1 Turbo, there were no fundamental changes to the engine design, but its compression ratio was further lowered to 9.0:1 to take into account Porsche’s new Variable Turbine Geometry (VTG). Clever software controls developed by Weissach allowed the turbine vanes to turn, akin to feathering an aircraft propeller, according to how much boost was called for as the 911 was accelerating. This more precise utilisation of turbocharger energy not only meant a wastegate was no longer required, but resulted in enormous extra boost, increasing the 997 Turbo’s power output from the 414bhp of its predecessor to 473bhp. VTG allowed an Overboost (via the optional Sport Chrono and limited to ten seconds) which momentarily pushed maximum torque from 620Nm to 679Nm. Cd remained at 0.31 and use of aluminium door panels and framework kept weight to 1,585kg, no greater than the 996. 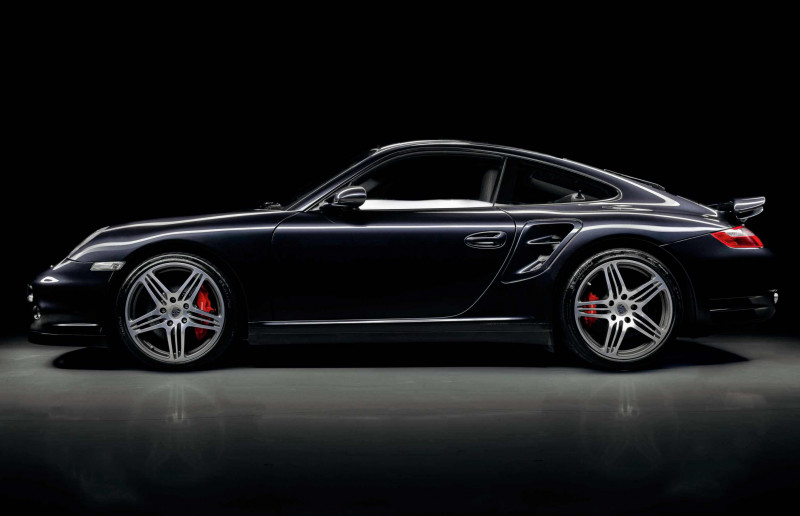 Like previous Turbos, the 997.1 used the stiffer C4 body, but handling dynamics were enhanced by a more sophisticated control system which simultaneously coordinated traction management (PTM) varying drive between the front and rear axles, damper settings (PASM) and the standard stability control (PSM). The cabin was almost indistinguishable from any other 997; full leather was standard, as was Porsche’s latest navigation software, but adaptive seats, Tiptronic, and even parking sensors were still extras.

Porsche built 15,629 of the 997.1 Coupés and 6,100 Cabriolets between 2006-08. This was a faster rate than the 996, of which 20,000 were made over five years. Whereas it took six years for 996 values to fall to half the £86,000 new price, the 997, which without options began at £98,000 (and a six-month waiting list), did not reach the halfway point until about 2016; since then, values for lower-mileage cars have remained mostly stable. Northway Porsche has several 997.1 Turbos ‘on its books,’ cars that it maintains and has sold and re-sold over the years. The Berkshire-based specialist reckons the pandemic slowed the market almost to a standstill during 2020 and sellers lowered prices to generate interest. The general upturn in consumer confidence forecast for mid 2021 will almost certainly be reflected in stronger 997.1 Turbo pricing for the better examples.

The 997 Turbo is a breathtaking performer. Low speed ride is firm, but road unevenness is smoothed out by the suspension and the emphasis is clearly on refinement, quite different from the 997 GT3. Depress the accelerator gently and speed picks up; give it more of a shove and the 997 shoots forward with such alacrity that the first lesson learned is that anything approaching full bore acceleration needs careful planning and space. The variable vane turbines abolish turbo lag, which has been replaced by a seemingly linear delivery of thrust. Given its head, from 2,000rpm, the 997.1 accelerates in an undiminished wave of torque which does not slacken until about 6,000rpm. Most were ordered with the Tiptronic gearbox, here in its final iteration before PDK. An understandable choice given that most drivers might prefer to keep both hands on the wheel in view of the ballistics at their command. Porsche in fact claimed a fractionally faster 0-62mph time for the automatic as the five ratios were better suited to the torque curve. But with the manual gearbox and especially with the optional short-shift, the enthusiast will relish the response of this now distinctly analogue supercar. 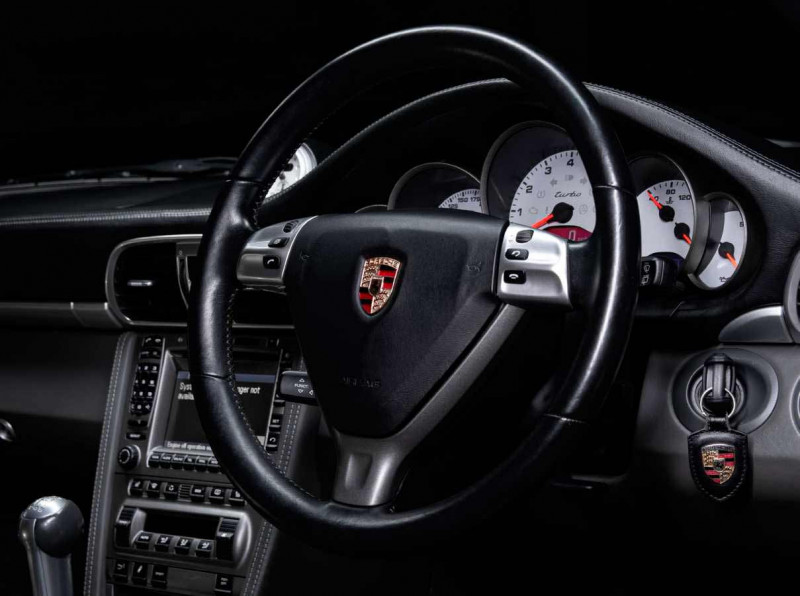 In 2021 the ‘Mezger’ 997 Turbo is by most standards an old car, of an age where anonymous, mass-produced diesel SUVs and hatchbacks are often written off as economically unrepairable. A Porsche of course is engineered to different standards, but components corrode and wear out, so the caveats that apply to any 997 apply equally to its Turbo brother. A Porsche has a sophisticated suspension: after a decade and more, bushes fail, control arms slacken, struts and dampers become fatigued. Exposed brake pipes corrode, as do engine coolant pipes, and the records of a correctly maintained car should show this pipework has largely been replaced at least once. The exhaust system is particularly exposed to road spray and the manifolds will be ‘fused’ to the engine after 15 years if they have not been replaced or re-bolted.

An expensive purchase at the outset, 997 Turbos will usually have had correct, probably OPC maintenance for their first eight to ten years, but as values reached their lowest, some cars will have dropped out of the OPC or Independent Porsche circuit and missed routine services. These obviously are the examples to identify and avoid. Paul Stacey of Northway has worked on the 997 since it was new. The ‘Mezger’ engine he says is “bullet-proof.” He has known one or two instances where timing chains stretch, but their subsequent rattle is more an irritation than a sign that serious investigation is needed. The engine’s greatest vulnerability seems to be corrosion of the centres of the turbocharger housing. If identified early enough the housing can be replaced, a long and expensive task. If the corrosion extends beyond a certain point, dismantling is impossible and the only recourse is to get an entire new unit for which Porsche charges £3,000. A mild-steel-bodied tandem suction pump is attached to the cylinder head and this can rust through, again this is an expensive (£800) replacement.

997s of both generations have long dropped out of OPC showrooms and the best source for most buyers is a reputable Independent. Ray Northway for example had lost count of the number of used Porsches offered to him that he has turned away because their histories are obscure. Mark Sumpter of Paragon works on the same principle. Northway also dislikes aftermarket modified cars (“rarely done properly”), a useful caveat for almost any 911 buyer. A Porsche upgrade is different: “Porsche’s short shift on the Turbo is far better than anything anyone else makes,” says Paul Stacey.

Once again, a long-term successful purchase boils down to condition and service history and a strong element of trust in the seller. A larger maintenance budget than for a non-Turbo 911 also needs to be part of the purchase decision.

For a £100,000 car, the 997.1 Turbo was not generously equipped, but as ever Porsche tempted buyers (and as ever, did so very profitably) with a comprehensive extras catalogue. The 997 was the last Turbo to offer a choice of manual or Tiptronic shift – its successors would offer PDK. The Tiptronic option cost £1,961. Adaptive seats cost £674, seat heating £269, and Porsche charged £126 for the privilege of embossing them – and £476 if the buyer fancied the carbon interior trim. Amongst the sporting options were £753 for a locking differential and ceramic brakes for a not inconsiderable £5,349. Autocar’s road testers especially appreciated the Sports short shift (a reasonable-sounding £380) which allowed them to change gear “with a flick of the wrist,” and the Sport Chrono, the Turbo’s party trick and a £1,015 extra. Perhaps the most practical option was one of the least costly: £325 Park Assist.

With perhaps 2,000 997.1 Turbos delivered to the UK, there is no shortage – so despite its ‘final Mezger’ status, this model is unlikely to be the investment grade material that a 997 GT3 represents, let alone special editions like the 997 Sport Classic. Paul Stacey says that the Mezger Turbos with the best potential are the rarer, manual gearbox cars, especially the Coupés. These cars, he states, are more sought after than the (frequently) Tiptronic-equipped Cabriolets.

Where else can you buy a 195mph supercar you can use every day?’ was the rhetorical question in Autocar’s glowing 997.1 Turbo road test of June 2006. 15 years on, Paul Stacey observes that “pound for pound, for performance nothing else compares,” to explain why the market will still pay £55,000 for a Porsche that is vintage by today’s standards, to the uninitiated looks like any 911, and which is costly to maintain. But for the buyer who understands and accepts these factors, Autocar’s verdict, “still the all-weather supercar benchmark, astounding pace and ability mated to daily usability”, says it all.

MEZGER TURBOS WITH THE BEST POTENTIAL ARE THE RARER, MANUAL GEARBOX CARS

ABOVE PCM 2.0 in the 997 is considered dated tech today, though hopes are high Porsche will unveil a modern navi replacement soon. BELOW Manual transmission is rare on the 997.1 Turbo. Three-spoke multi-function wheel is nice to hold, the buttons unintrusive for fast driving. RIGHT 997.1 returned the 911 to more traditional aesthetics with rounded headlights. Body was again shared with C4. ABOVE VTG, first adopted on the 997.1, is still used in the 911 Turbo today. Sport mode, PASM and Sport Chrono all add some modernity to an otherwise classic cabin.