It doesn’t get much better than the E30 M3, and this stunning project has been perfectly enhanced, making it a truly exceptional example of this performance icon. Words: Elizabeth de Latour Photos: Patrick Lauder.

Cars truly don’t get much more legendary or iconic than the E30 M3. It doesn’t matter that hardly any of us will ever get to drive one, let alone be fortunate enough to be able to own one, it will never cease to be an icon, and BM fans will never stop dreaming about it. Ray Almendralejo doesn’t have to dream about E30 M3s, though, he just has to look inside his garage to see his very own stunning Alpine white example, and he’s a lucky guy because this car is just sensational. 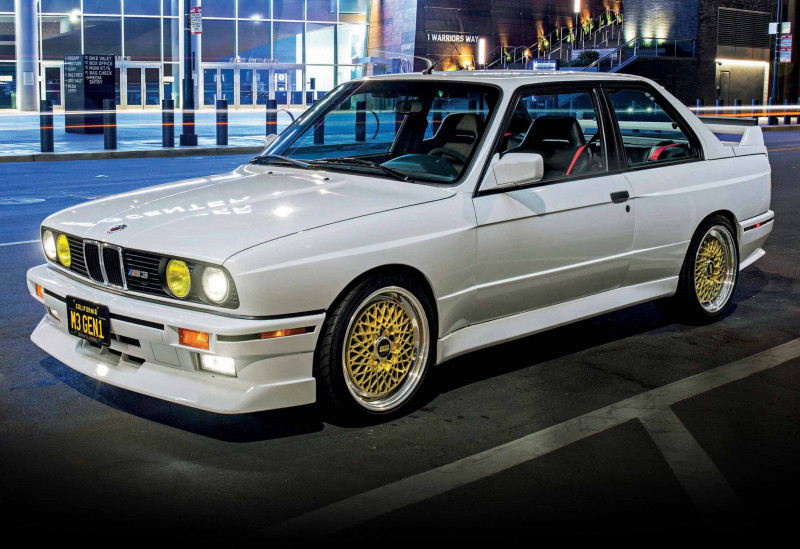 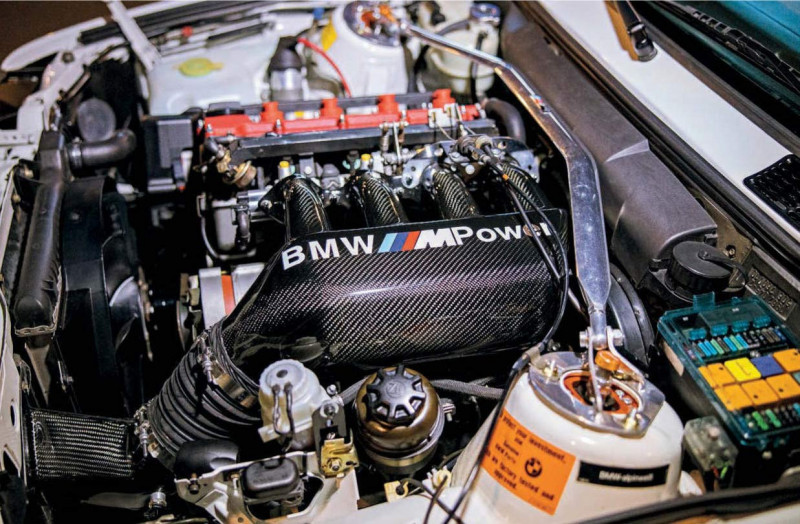 The first thing we’re going to say before we even take a moment to talk to Ray is just take a moment to look at this E30. Ray’s done a wonderful job of enhancing everything that makes the E30 M3 so appealing without spoiling any of its originality, and the end result is just stunning. This M3 looks so good, it’s just so right, and we could happily spend hours drinking in those iconic angular lines. If you ever meet anyone who wonders what all the fuss is about when it comes to the E30 M3, just show them this one.

An E30 M3 is not a casual purchase – they are not cheap cars, and they need proper looking after, so you know that anyone who buys one is a real BMW enthusiast, and that’s definitely the case for Ray. “I’ve been into BMWs since 1984,” he smiles, “I loved the BMW sport sedan designs and the engineering. My first BMW was a 1997 M3 – at the time it fit the budget, and I’ve always been a fan of the M3 and its history,” he adds. We don’t doubt that for a second and not just because we’re looking at his E30 M3, but because it shares garage space with a Dinan E92 M3 S3-R 4.6L (yes, a 4.6-litre E92 M3…) and an M4 CS, so when it comes to M cars he’s fully committed. 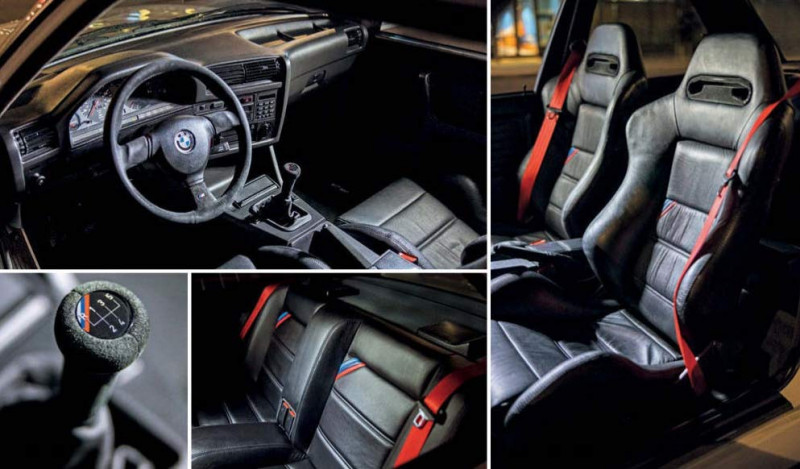 All three are special cars, but it’s this E30 M3 that really stands out even in a collection like that, and it’s a car that has long been on Ray’s wishlist. “I first saw an E30 M3 in 1989 at Weatherford BMW in Berkeley. Definitely love at first sight!” he chuckles. “The body shape, the body flares, interior and the engine! It was ahead of its time for sure. At the time, I’d just started a new job, and my daughter had just been born. The car had a sticker price of $36k!

I said to myself, ‘It’ll be a while until I own one of these babies’,” but good things most certainly come to those who wait. “Fast-forward to 2012. I felt comfortable to revisit my first encounter with the E30 M3, and maybe start the move towards owning one. I travelled all the way to Dallas and eventually found one locally, at a boutique car dealer in Santa Rosa called Good Stuff Auto,” and with that, a 23-year dream had been achieved.

This story could have very easily ended there – BM enthusiast buys classic dream M3, tucks it away to enjoy on high days and holidays, the end. But if it had, we wouldn’t be writing about it, and we’re very glad it didn’t. You see, Ray was as excited about making his E30 M3 his own as he was about owning one in the first place, and he had a lot of ideas he wanted to try out. “The car went through a lot of iterations after I bought it,” he grins. “I had 20-plus years of ideas built up and brewing, so I tried to employ all those ideas because I was so excited to finally have this car!

So, the car had a lot of transformations, to say the least. Finally, after trying so many things out, I just wanted the car as an OEM+ Sport Evo build,” he says, and that’s how the car sits today.

What we like about Ray is that when it came to mods he didn’t beat about the bush and dived straight into the engine upgrades. “I knew I wanted to convert the car to 2.5-litres for more power and keep it naturally aspirated,” he says, and that’s precisely what he’s done. The S14 is now a 2.5 stroker and boasts an OEM Sport Evolution 2.5 crankshaft, CP forged pistons, a Stage 2 performance cylinder head and a 284/276° Schrick camshaft set.

There are also Sport Evo fuel injectors, 48mm throttle bodies, a Sport Evo-style 8mm ignition wire set, and that gorgeous carbon airbox paired with Alpha N. Ray has added a Sport Evo exhaust manifold plus a Supersprint mid-pipe and a Sport Evo silencer, and it’s all finished off with a Turner Motorsport performance chip. While you can’t appreciate the work that’s gone into it from the outside, you can appreciate that carbon airbox that dominates the engine, and Ray can appreciate the 225whp (around 270hp at the crank) that his 2.5 S14 is making.

In terms of appearance, Ray has done a wonderful job of enhancing the styling with period additions. This M3 has been treated to a full respray in its original Alpine white, which includes the engine bay, and then Ray has added the components required to give his E30 that OEM+ look he was after. “I wanted to follow the path of the Sport Evo look, so I installed all OEM Sport Evo parts.

The exterior was probably the quickest to do except for sourcing OEM Sport Evo parts from Germany. Fortunately, Markus came through with all the parts I needed, and they were all done at Sonic MS.” Up front sits an Evo 2 spoiler with a Sport Evo spoiler at the rear, but Ray has also added a few personal touches to make his M3 stand out. He’s added Bosch smiley headlights, while the inner high-beam lenses have been painted yellow, and there are also Euro grilles and front and rear Motorsport roundels for the finishing touch. The changes are subtle, but the combination of OEM styling elements plus those little personal touches give this E30 M3 a purposeful and individual look that we just can’t get enough of. And you can’t talk about this M3’s looks without mentioning the wheels.

“I’ve always been a fan of the BBS E50 magnesium wheel in gold, so it was a no-brainer,” says Ray, casually, as if running these legendary wheels was the most normal thing in the world. The E50s couldn’t be a more perfect choice for this E30, and the 17s just suit the whole build so well. And while this M3 isn’t exactly slammed, it certainly sits a little lower than stock, and that’s down to the rather fancy suspension setup that Ray is running. “It was a bit difficult choosing the suspension modifications because the choices are limited. The shop spoke to Moton and asked if they could build custom two-way coilovers, and they did,” smiles Ray. Not only do the coilovers serve up a bit of a drop that gets this E30 M3 sitting just right, but the two-way suspension offers plenty of adjustment to allow him to fine-tune the car’s handling, and get it feeling even sharper than stock.

As with the exterior, Ray’s aim on the inside was to keep things in line with the Sport Evo look, and so he’s fitted OEM Sport Evo Recaro SRDs, which have been joined by rear seats that have been retrimmed for that Sport Evo look with the M tricolour stripe detailing. Inside the cabin, you will also find red Sport Evo seatbelts, a Sport Evo steering wheel, a suede gear knob, and even the dead pedal is a Sport Evo item. It all combines to make the cabin look and feel so special, and Ray’s commitment to sourcing all these OEM additions is seriously impressive, and it was all worth it.

If you couldn’t tell, we’re a little bit in love with this E30 M3, and can you blame us? We’re huge fans of these classic icons anyway, but when one comes along that looks as good as this, well, we can’t really help ourselves, but no one is more passionate about this car than Ray himself. “I’ve been building the car from 2012 to 2020. I still have new ideas sometimes and I try to test them out. It never ends,” he laughs, but there’s one core element of the car that we don’t think he’ll ever change. “The engine and the DTM intake are my favourite mods. All I can do is smile when I drive it and hear the sound!” he beams, and that’s the level of joy that any build should bring you. With new ideas floating about all the time, you just know this car is never going to be completely finished, even if those are just incremental changes. “I found a set of Sport Evo cams last year so that might be the next mod for the car. Also, I’m still debating to convert the front to a Sport Evo. I already have all the components,” muses Ray, which to us sounds like he’s already made his mind up. Ray’s built himself an awesome M3, a Sport Evo replica for a fraction of the cost of a real one with a personal twist, and it really doesn’t get much better than that.

“ I first saw an E30 M3 in 1989 at Weatherford BMW in Berkeley. Definitely love at first sight! The body shape, the body flares, interior and the engine! It was ahead of its time for sure”