Offering incredible performance for its price, the 996 Turbo is a sensational used buy

In turbocharged form, the 996 transcended its perceived ‘bitsa’ roots (at least in the eyes of those cynics who were suspicious of the aesthetic Boxster connection) to become a truly phenomenal performance car. And with the ensuing X50 upgrade, Cabriolet variant and ultimate Turbo S spec, this was a hot Porsche that just kept on getting hotter. 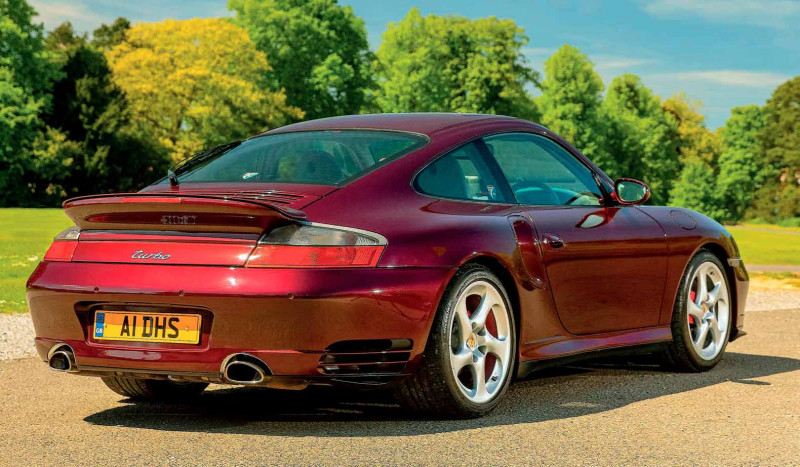 Forced induction has gone hand-in-hand with top-tier 911s since the introduction of the 911 Turbo (930) in 1975. If you’re interested in Filofaxes, red braces, and pastel-hued suits with the sleeves rolled up to the elbows, then well done – you’ve successfully completed the Big Bumper Course of Porsche 930 Clichés! The 930 is an iconic thing, and rightly so – back in the gogo ’80s, it was one of the holy trinity of bedroom wall poster cars, alongside the Ferrari F40 and the Lamborghini Countach; its unique hook was that in this company at least, it was punching above its weight: a tweaked sports car alongside a pair of supercars. Porsche had been turbocharging race cars since the 1960s and was well-versed in forced induction, but that wasn’t to say buyers were in for an easy ride – initial road tests highlighted the car’s demanding style, thanks to its short wheelbase and marked turbo lag, and this was all exactly as it should be. Phenomenal performance shouldn’t be too easily accessible, you have to work for the rewards. 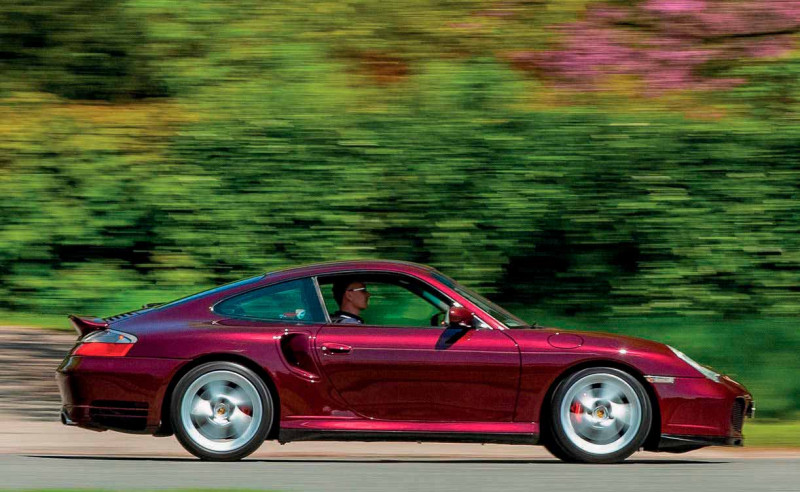 This risk/reward matrix came to be a defining feature of turbocharged 911s forever after. The subsequent 964 Turbo, while markedly friendlier, was still a bit of a handful, as was the 993 Turbo that followed it in 1995. So all eyes were on Porsche in 2001 when the mooted Turbo variant of the 996-generation finally broke cover. There was much chatter about this platform even with the forced induction, given that this was the first era of 911s to have water-cooled engines. The fact that much of the front end of the car was shared with the cheaper Boxster did little to appease the purists, although those with an open mind found the 996 to be just as beguilingly tactile and entertaining as its numerous air-cooled forebears. And the 996 Turbo? Well that turned out to be something truly special.

A significant part of this success can be attributed to its frankly astonishing motor, which was directly derived from the Le Manswinning 911 GT1 race car. This twin-s eyes were on Porsche in 2001 when the mooted Turbo variant of the 996-generation finally broke cover. There was much chatter about this platform even with the forced induction, given that this was the first era of 911s to have water-cooled engines. The fact that much of the front end of the car was shared with the cheaper Boxster did little to appease the purists, although those with an open mind found the 996 to be just as beguilingly tactile and entertaining as its numerous air-cooled forebears. And the 996 Turbo? Well that turned out to be something truly special.

A significant part of this success can be attributed to its frankly astonishing motor, which was directly derived from the Le Mans winning 911 GT1 race car. This twin- turbocharged and intercooled 3.6-litre flat-six produced a brutal 420hp and 415lb ft, featured VarioCam Plus (with two-stage lift on the intake side), and made all the right noises. This was mated to an intelligent and advanced drivetrain and chassis package, featuring all-wheel-drive, stability management, and the option of either a six-speed manual or a five-speed Tiptronic transmission.

The visual drama was ramped up more than a little too: noticeably broader-hipped than the regular Carreras, the wide-body Turbo is distinguishable by its fixed rear wing and copious vents for the various extra radiators, as well as the 18” wheels and bi-xenon headlights. An important and popular upgrade arrived in 2002, in the form of the X50 package; this brought in larger K24 turbos, a quad-tail exhaust system and a revised ECU to bring peak power up to 450hp. There were a few non-power upgrades at this stage too, including rainsensing wipers, optional Bose audio, central cup-holders and a glovebox.

A Turbo Cabriolet arrived in 2004, which was good news for enthusiasts as there hadn’t been such a thing since the era of the 930 – there was no Turbo Cabriolet variant of the 964 or 993. And the final flourish of the oeuvre was the Turbo S of 2005: available in either coupé or cabriolet form, this was effectively an X50-equipped Turbo which also benefited from ceramic-composite brakes (PCCB) and some interior upgrades including aluminium-faced dials and a six-CD changer.

WHAT TO PAY? There’s a large amount of variety in the pricing on today’s market, but of course, this is a positive thing as there are (in relative terms) plenty of cars to choose from. So it’s not a case of mulling over the pros and cons of a small pool of cars; if you’re dead-set on a manual X50 then you shouldn’t have to ‘settle’ for a Tiptronic non-X50, for example.

£30,000 looks to be the 996 Turbo entry point – there are Turbos on sale for less than this, but you get what you pay for. There are X50s at this price, and rising to £40,000 will find you a clean one with acceptable miles and decent history. At £50k you’ll be looking at really nice examples with low mileage, and a little north of this is where you’ll find the later Turbo S, capping at about £55k. Cabriolets command a premium over their tin-top brethren, with the lowest-priced starting at £45,000 and the best breaking through the £60k mark.

Any 996 Turbo is a fun 996 Turbo, so the decision-making process here is really dictated by personal preference. We’d probably go for a coupé; while the Turbo Cabriolet is a formidable and supremely desirable thing, you do pay a sizeable premium for having the wind in your hair, and that extra outlay could be better channelled into finding exactly the spec you want in coupé form. There are a lot of silver 996s so we’d prefer a different colour – black suits them well, or if you’re really lucky you might find one in Orient Red, which looks absolutely stunning. We’ll have a manual please, with the X50 pack – that seems to be the best balance of value and performance.

WHAT TO LOOK FOR?

There are a few things to look out for that you’d likely find with any 996 – stone chips across the nose and the mirrors are common, as is condensation inside the headlights and potential corrosion around the door latch inside the B-pillar if it’s misaligned… although you shouldn’t be finding body corrosion anywhere else, as a rule.

The front bumper’s various intake apertures have mesh grilles inside them to keep debris out, and these can become clogged if left unchecked – and if they get damaged by stone strikes or what have-you, they can let leaves and slush and so on into the condenser and radiators behind. A key part of the Turbo’s visual appeal, as well as its impressive aerodynamics, is that large fixed rear wing, which has a secondary active wing within it that rises on hydraulic rams above 75mph. It’s worth checking that this is working properly, as the rams have been known to fail and it can be expensive to remedy. Before shelling out to replace the whole mechanism, it’s worth having a try at disassembling, regreasing and reassembling to see if this fixes it. If you’re looking at a Cabriolet, carefully check the condition of the roof and make sure that its electrical raising and lowering system is working as it should. These Cabriolets came as standard with a hard-top, so make sure that comes with the car too.

As befits a top-of-the-range model, there was plenty of standard kit in the cabin. All Turbos got leather trim and air-conditioning, with an electric sunroof offered as a no-cost option. Porsche Communication Management was an option, and this sat-nav was once very desirable, although to be honest, it’s sufficiently aged now as to be more of a take-it-or-leave-it thing. 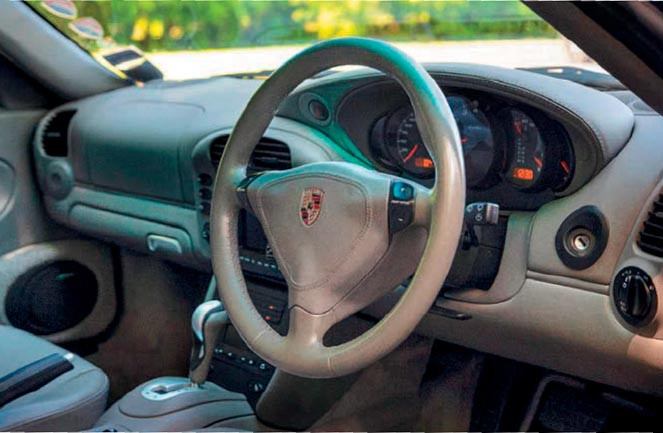 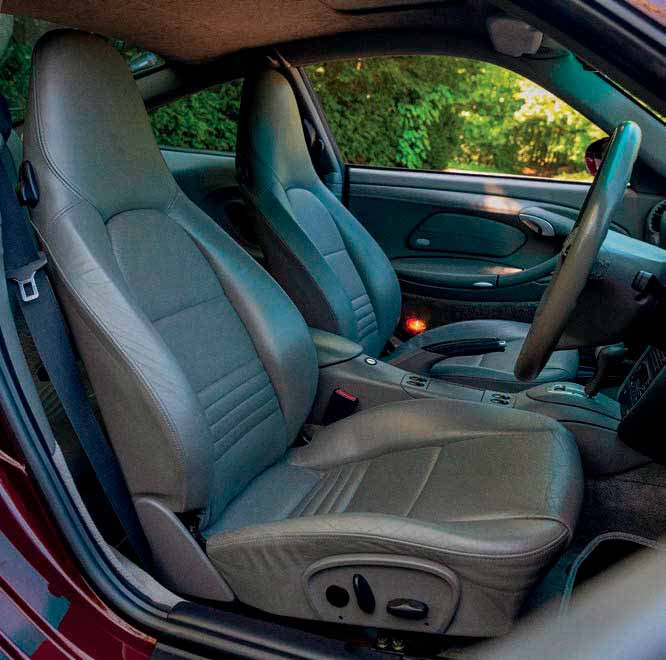 In terms of seats, there are two types you’re likely to find: the standard seats are electric memory items but aren’t hugely supportive; the other option was Sport seats, which are far more supportive but aren’t electrically adjustable. Bolster wear is something to look out for, as are scratched and scuffed plastics across the dash, but in general, the interior is pretty hard-wearing.

When it comes to the drivetrain, it’s imperative that you interrogate the history (and ideally the owner) – because while these engines are generally robust and reliable, they can go wrong in quite expensive ways. Regular servicing is the key – Porsche recommend oil changes every 12k miles, but conscientious owners will have done it at closer to 6k. The IMS issues suffered by naturally-aspirated 996s aren’t something to be afraid of with a Turbo, but make sure there are no evident oil leaks anywhere. 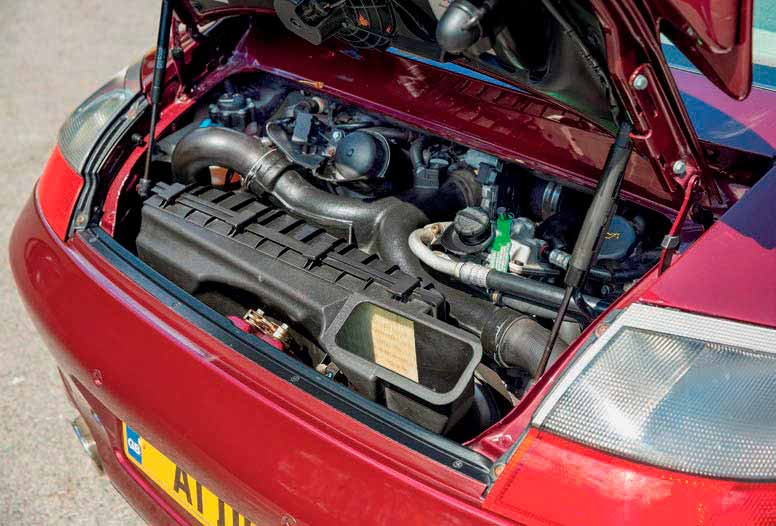 Rattly exhausts aren’t uncommon, and it’s usually just a heat shield that’s worked its way loose rather than being an actual exhaust failure. Check that the engine temperature is normal and that the air-con works, as the radiators and condenser in the nose are vulnerable to damage. Check the clutch operation carefully too – the clutch is servo-assisted so it’s not always obvious when it’s worn.

Have a good look at the brake discs on both sides, as they can crack on the inside while looking fine from outside, and they’re expensive to replace. And bear in mind that if you’re looking at a car with PCCB, while Porsche did claim that those discs would last 150,000 miles, that’s probably nonsense… and they can cost well over £1000 per corner to renew. Think twice about cars with creaking suspension bushes at the front, because the bushes are bonded to the suspension arms so it’s a bigger job than you’d think. And these cars are sensitive to having the correct geometry settings – uneven tyre wear will be the most obvious clue to things being out of true.

The 996 Turbo was a truly formidable proposition when it was launched, taking the platform of the undisputed king of the sports car genre and imbuing it with genuine supercar performance. This was no uncompromising track machine either, it came lavishly equipped (relatively speaking), and despite the 996 as a whole receiving a lukewarm response from the die-hards who were angry about having a water-cooled 911 with a Boxster nose, the Turbo did much to reframe perceptions. And they sold like hotcakes, so there’s plenty of choice on the market today.

It seems almost unbelievable that this model went off sale 17 years ago – it’s now a modern-classic, and it won’t be that long until it’s. classic-classic. Which makes the values today seem really quite reasonable. Under £40k for a hysterically quick Porsche whose value will inevitably rise? It makes a lot of sense.

Despite being over 20 years old, the 996 Turbo is still a seriously rapid machine, even by modern standards. 996 Turbo has plenty of presence. Active wing rams can fail, so make sure it raises and lowers correctly. Air intakes in the rear arches make the Turbo easy to distinguish.3.6-litre ‘Mezger’ engine is extremely tough and reliable if properly cared for.

“IT SEEMS ALMOST UNBELIEVABLE THAT THIS MODEL WENT OFF SALE 17 YEARS AGO – IT’S NOW A MODERN-CLASSIC, AND IT WON’T BE THAT LONG UNTIL IT’S CLASSIC-CLASSIC”

996 Turbo has plenty of presence

Air intakes in the rear arches make the Turbo easy to distinguish. Active wing rams can fail, so make sure it raises and lowers correctly.

3.6-litre ‘Mezger’ engine is extremely tough and reliable if properly cared for. Standard seats are very comfortable, while Sport seats offer more support. 996 Turbo interior is well built and solid Tiptronic gearbox works well with the turbo engine. You can pick up a 996 Turbo for around £30k these days, making it an incredible performance bargain.

You can pick up a 996 Turbo for around £30k these days, making it an incredible performance bargain