Just look at it. All sporting coupés of the Nineties had driver appeal in one way or another, but none could match the sheer presence of the Tipo 916 Alfa Romeo GTV. The Spider, although less delicate than its predecessor, had equal visual punch. 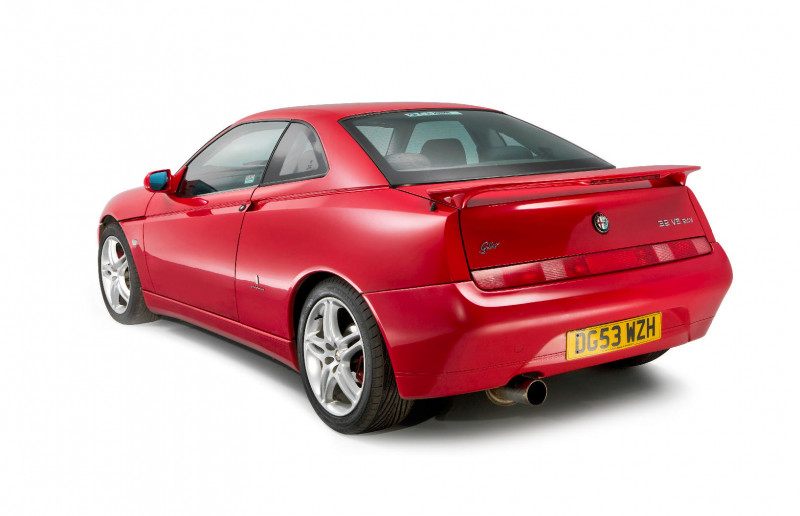 Once you’ve stopped staring, hop behind the wheel and it’s pure Alfa, only much better made than previous efforts. Style, decent quality and a good steer is what all Alfas are supposed to offer and these two models had it all by the bucketload. By the time production officially ended in 2004, around 82,000 had been made, so with a good choice out there and surprisingly affordable prices, the GTV and Spider are more tempting than ever before.

But as these cars age, frailties are starting to emerge. And though the four-cylinder cars are still temptingly cheap, many have been neglected, while their V6 siblings are increasingly commanding investment prices. To ensure your money is wellspent, we spoke to Kevin Abigail of EB Spares, Italian car specialist Stef Proietti, and Totally Alfa in Devon.

Originally designed in 1987 to take Alfa 75 underpinnings, the Enrico Fumia-styled GTV and Spider was reworked around front-drive Alfa 155 mechanicals, heavily revised with multi-link rear suspension by Bruno Cena. A handful of 12v V6 Spiders were built first, in 1993, with another small run of T-Spark GTVs following in 1994, before both models were officially launched in 1995. Both cars were available with 2.0-litre T-Spark four-cylinder engines. V6 options were the 3.0-litre 12v on the Spider, and – in Italy – a 2.0-litre turbo on the GTV.

A new 3.0 24v V6 became available in the GTV in 1997. Right-hand-drive V6 sales commenced. A chrome grille surround heralded the arrival of ‘Phase 2’ cars from 1998. The interior was redesigned with new centre console. Italian-market Spiders were available with 2.0-litre turbo V6. The GTV 24v had an optional six-speed gearbox.

The Type 916 isn’t particularly troublesome, but bodywork and trim parts are tricky to come by. Rusty sills, for instance, are easily repairable for £50 per sill plus £300 labour. Rusty rear wheel arches are a problem though, because spare parts are unavailable, so if you can’t do it yourself, it’ll cost double that of a sill to have them fabricated, painted and fitted. However, in response to the enthusiastic following these modern classics now have, Alfa has plans to remanufacture repair panels.

The good news is that most of the front end was plastic/composite, which avoids rust worries for the wings and bonnet, although the latter costs around £400 for a second-hand item. Check those areas for stone chips and subsequent paint damage, faded paint and peeling lacquer – all common issues especially on red cars – because a respray costs £500. Elsewhere, galvanised bodywork mostly kept corrosion at bay, but at this age it’s starting to rear its head. The sills have plastic covers that hide rot so probe carefully. It’s also worth inspecting the floorpan and jacking points. Even if the bodywork is sound, it’s a good idea to subject the car to a rustproofing session, to prevent vulnerable areas like the sills from succumbing.

Engines are strong but lack of regular servicing is bad news – the 60k mile check was pricey on Twin Spark units thanks to the double row of spark plugs – so look to see if changes been ignored. Check for leaks from the oil cooler pipes on the V6 – replacement is labour-intensive and pricey. Poor running and lack of power can be a failed mass air flow sensor – a £150 replacement part and a £300-plus job to fit.

Alfa Romeo recommends that the GTV has a cambelt change every 72,000 miles, but it really should be done at around 24,000. These engines use a lot of oil, so check for regular changes, and also check the dipstick to get a good idea as to whether the owner’s been checking and topping it up in between changes too. If it sounds rattly like a diesel, it means the cam variator should be replaced when the cambelt is changed – a full service including this will cost £300-£350 on a four-cylinder, £500 on a V6.

Later engines have a plastic valve cover and a variable-length intake manifold. Rarer four-cylinder engines include the Italian-market 1.8-litre four, rarely found in the UK, and a 2.0-litre JTS with direct fuel injection which accompanied the final deeper-grilled facelift. All engines are ‘interference’ types, where the valves will hit the pistons should the cambelt snap, so a rebuild will beckon if service intervals are not maintained – budget at least £1800 for a four-cylinder and as much as £3500 for a V6.

The manual gearbox (there was no automatic) isn’t inherently problematic, but hard use eventually takes its toll. Listen out for the usual rumbles and whines that point to an impending rebuild, but bear in mind that overhauling the linkages with an inexpensive kit from an Alfa specialist should cure an imprecisefeeling gearshift, and regular fluid changes will prolong the life of the gearbox. A further issue is clutch wear, signified by a high biting point; budget around £1000 to replace it.

Inside, duff electric windows and central locking are an annoyance, and costly air-con repairs are often ignored, so check everything works. Heated rear windows fail, melting the fuse and relay, although these are easily and cheaply replaced.

Make sure that the car comes with the dark-red master key that enables others to be programmed – programming a replacement can cost as much as £450. The warning lights for ABS/airbags/engine management must illuminate and extinguish on ignition if hefty bills are to be avoided, too.

Don’t be surprised to find trim rattles and fragile switchgear, and excessive wind noise on GTVs can be fiddly to eradicate. Plenty of cars had leather trim, which just needs the usual inspection for scuffs and worn bolsters, although it’s hard-wearing. The cloth interiors are too, although they don’t look as exotic as the ribbed leather versions. Thankfully, if you fancy swapping a cloth interior for a leather one, it’s a straightforward unbolting-and-replacing job that even novices could do themselves with a bit of guidance from the club, and leather GTV interiors can be found for sale online fairly frequently, although as fewer cars are broken, this may change. Inspect the condition and operation of the Spider’s hood thoroughly. Lack of use causes failed or sticking motors, and it can be hard to source replacement bits – which are pricey even when you do find them. It’s around £200 to replace a damaged rear screen and nigh-on £1000 for a complete hood from a specialist.

Hard-driven examples punish their front wishbones, which wear and bend, resulting in vague steering and road manners – budget £30 per part plus an hour or two in labour per side to replace them.

It’s easy enough to replace the standard dampers with upgraded items, and you could also consider poly-bushing, although that will harshen the ride if you go for stiff performance versions. More affordable is a strut brace that costs £80-120 and is a doddle to fit. It’ll certainly improve a Spider’s rigidity.

‘While the Twin Spark handles better, the V6 sounds so special

Engines are strong but early cambelt changes are recommended. Leather interiors are reasonably easy to source, but for how much longer? Unmistakable Pininfarina lines, a lusty range-topping V6 and taut handling – it’s easy to see why good ones are being sought.

Gary Fisher’s first experience with Alfa Romeo was through his family 146. From there, he ended up with numerous other Alfas but the ones that really made an impact were the Tipo 916 GTV and Spider. ‘The one that really fuels my passion is my GTV Cup edition – I own the very first one made!’ says Gary. ‘I bought it sight unseen after being told it was in great condition — but it wasn’t. It cost £4k to get it through an MoT!’

Gary has no regrets though. ‘I drive it to Italy every few years. While the Twin Spark handles better, the V6 sounds so special. Joining the Alfa Romeo Club is essential though. There’s advice wherever you live and whatever you drive.’

Classic Cars contributor JJ owned his GTV Twin Spark for five years. ‘I was told by a lot of Alfa people that the GTV was the safest bet for marque novices – well-built, easy to work on, and they don’t go wrong. But I took a massive risk, buying a GTV with an exhaust hanging off, for £300 from a soldier who was about to go off on deployment. And that was with an MoT!

‘I took it to get it rustproofed at Autolusso in Bedfordshire, where 916 expert Ned went through it with a fine-toothed comb and found three A4 sheets’ worth of things wrong with it, a potential £5000-£6000-worth of impending bills! It was the drawback to buying such a cheap car, I suppose. But after he’d replaced just-about everything, it ran flawlessly for five years. The only problems after that were a battery drain on the – aftermarket – stereo, and a strained two-part throttle cable, which was a simple fix using generic parts. I’d have another in a heartbeat!’

Robert Golton has two Spiders, a V6 and a T-Spark, the latter he drives every day. ‘Price is not necessarily indicative of quality,’ he says. ‘I bought a silver TS which was a dog, needing suspension, rust and engine work, so I bought a £650 MoT failure as a parts donor and it turned out to be in better condition, all it needed was a rear spring pan, so I sold the silver car! Rear suspension is an expensive fix though — £600 parts plus ten hours labour to overhaul, and the rear underfloor rusts too. Look for leaks too — Phase 1 cars have alloy rocker covers which crack if bolts are overtightened.’

Peter McIlvenny of specialist classic car insurer Carole Nash says, ‘These beautiful cars still look modern 27 years later, and this is maybe why they have not seen the increase in values you may have expected. Which to buy? No doubt the V6 is a stunning -looking and -sounding engine but don’t be put off by the lively 2.0-litre Twin Spark which is light, fun to drive, and more affordable. Now is certainly time to buy – £2000 will still get you a solid Twin Spark GTV, and £3k in Spider form. Around £7k should source a sorted V6. In terms of a return on your investment in the current market I would suggest a V6 Spider, even better if it is in Zoe yellow.’

‘Once you’ve stopped staring, hop behind the wheel and it’s pure Alfa’

Rarest of the Spiders is the V6. It’s not so great to drive but scarcity and unusual colours lift it into £5k-£10k range.

Most desirable is the GTV V6 Cup. Abused examples make £5.5k, stunners as much as £15k.

alfa romeo gtv type 916alfa romeoalfa romeo spider type 916
—
106
Write a comment
No comments yet. Be the first to add a comment!