Dating from its launch in 1990, this shot of the 964 Turbo also shows its principal creators, Paul Hensler (left) and Friedrich Bezner. As 911 project manager, it was Friedrich’s idea of filling the gap left by the abandonment of the 969 with a 3.3 Turbo 964. Paul was readily supportive and oversaw the modifications to the 930 engine to ensure that it delivered a sufficient power margin over the 250ps 964 Carrera. 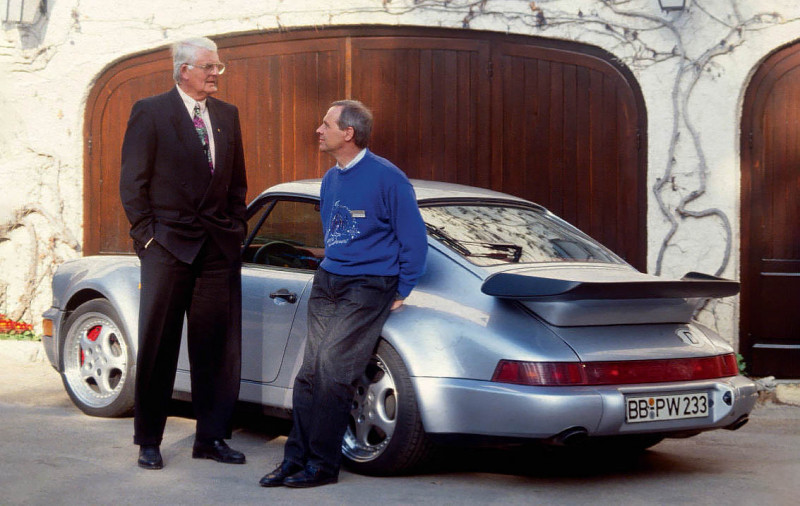 Both career Porsche men, they arrived at the company from different backgrounds. Paul, born in 1929 in Freiburg, completed his mechanical engineering degree before joining Porsche’s tractor division. When Porsche sold off its tractor interests in 1963, he moved to Zuffenhausen as an engine builder and tester. Paul’s first major project was to develop the 356’s flat four for the 912. He progressed via Piëch’s hothouse 917 racing programme to transaxle project manager – the 924 is attributed to him – before becoming what today would be called chief of powertrain, a role that also saw him involved in both the group C and TAG projects. Friedrich had humbler beginnings. He began at Zuffenhausen a decade earlier than Paul as a 14-year-old apprentice from Ludwigsburg. By 1959 he was testing 356s at the Nürburgring with Herbert Linge. As the 911 evolved, Friedrich was made gearbox specialist and after five years as engineering director Helmuth Bott’s assistant, he became 911 project manager, overseeing the development of the entire 911 range to the end of air-cooling.

Ulrich Bez’s summary cancellation of the 969, leaving Porsche without a Turbo 911, was a grievous blow to the men who had developed the 911 through its first 25 years. Friedrich’s solution, however interim, was a fully engineered 911 and the 3,800 964 Turbo 3.3s that were built earned Zuffenhausen profits far in advance of projections for the defunct 969.

Paul retired soon after the 911 964 3.6 Turbo’s launch. Yet the jovial engineer remained a regular attendee at the Porsche Swap Meet and other classic gatherings. Friedrich stayed until his 60th birthday in 2001. His final project was the 911 996 Turbo, its smooth rear quarters housing intercoolers, oil radiators and silencers as well as twin turbochargers. It was a packaging tour de force. In his modest way Friedrich was proud of this, but even more impressive is how two disparate individuals could collaborate so effectively and for so long – the essence of the company Ferry Porsche created.