Think all M3s should be rear-wheel drive? The all-paw M3 Competition xDrive proves rules were made to be broken...

For more than three-and-a-half decades, the BMW M3 recipe has been simple. Take the current-generation 3 Series, give it a bit more power, maybe even a bigger engine and then fettle the chassis to make it even better to drive. Add a handful of sporty design tweaks and bitte schön; you have the defi nitive sports saloon. The M division bigwigs can head off to the local Bierkeller, sink a couple of Weizens and wait for the critical acclaim to roll in.

Once again, BMW has followed the usual recipe and, aside from a lashing of marmite in the shape of ‘that’ grille, the fi nished product is a stunner. But BMW has also gone off -piste, creating a new and, supposedly, improved M3 to sit alongside the more traditional option. It’s called the M3 Competition M xDrive and it’s one of very few things that could match the G80 M3’s enormous nostrils for shock value: a four-wheel-drive M3.

First impressions are good. Walking up to the car reveals absolutely nothing to suggest this is an all-wheel-drive car. There are no extra aero features, no overgrown alloys and no special vents. There isn’t even a little badge on the boot lid or the C-pillar. There’s nothing in the cabin to suggest anything has changed, either. There are no subtle M xDrive logos or motifs – not even on the infotainment system or the digital instrument display. It’s just the usual M3 stuff.

It’s subtle in the extreme, and that’s a good thing, because buyers with anti-xDrive friends might want to keep their decision on the down low. Even the biggest M3 fan could sit in the passenger seat of an M3 xDrive for hours without ever noticing it had all-wheel drive.

All the differences are under the skin, where BMW has fitted its now-familiar M xDrive adaptive all-wheel-drive technology. That means there’s an electronically controlled multi-plate clutch in the transfer case, helping to split the torque between the two axles. Then there’s the Active M Differential, which splits the power between the rear wheels to suit the situation, and the M-specific traction control system that acts like an electronic project manager, distributing tasks between the mechanical components. 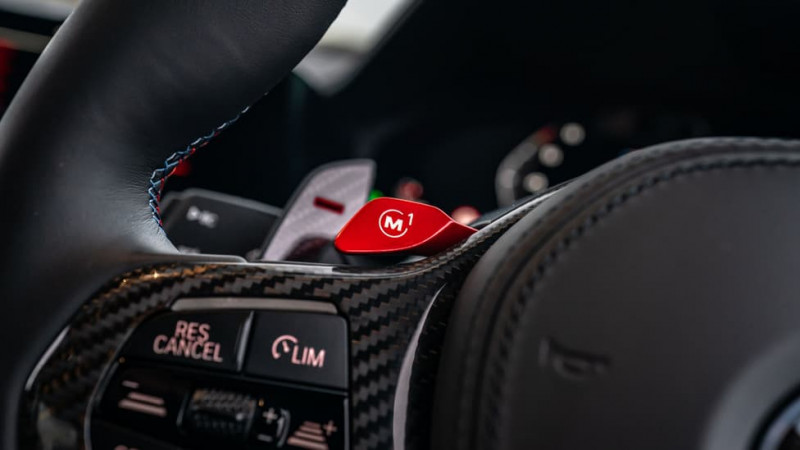 In true M3 style, the power is usually channelled exclusively to the rear wheels, but when the 285/30 R20 rear tyres can’t take any more, the clutch kicks into action and sends the excess to the front. So, while the M3 xDrive is technically four-wheel drive, it’s a rear-biased system that only troubles the front wheels when it needs to.

Although you can choose just how fourwheel drive it should be. As with any other M car these days, there’s a host of ways to configure the car for the setup you desire. Not only can you select from the pre-determined driving modes – Sport, Sport Plus and all that jazz – but you can also tweak the settings on a more granular level, choosing different settings for the gearbox, steering and suspension. 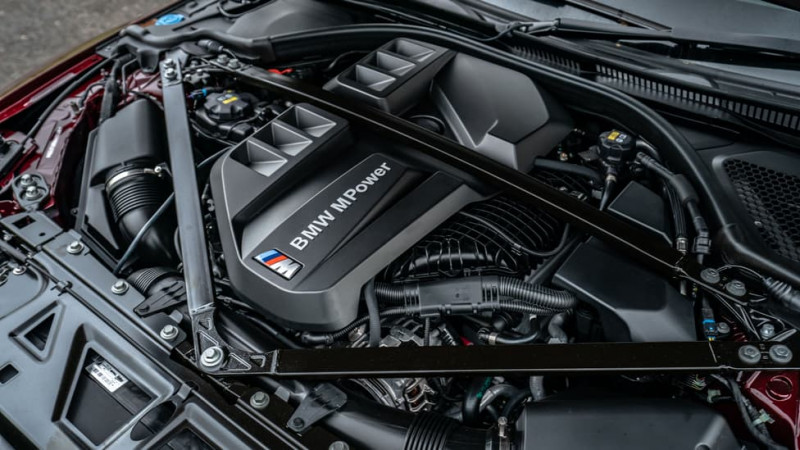 Hidden in that menu is an M xDrive option, allowing you to choose 4WD, 4WD Sport and 2WD settings. They’re fairly self-explanatory, allowing the driver to choose how much slip the all-wheel-drive system will allow. Opt for 4WD and you get the maximum traction, with the car splitting the power between the front and rear axles as required, albeit with a permanent rear bias. But 4WD Sport mode directs even more power to the back wheels, which BMW says will allow 'controlled drifts' And when you hit the track, you can switch off the Dynamic Stability Control (DSC) system altogether and simply enjoy the rear-wheel-drive M3 we all know and love.

Admittedly, it all sounds quite complicated, and it adds almost £3,000 to the rear-drive M3’s already hefty £75,660 asking price. So why would you spend a four-figure sum on a complicated option that you then switch off when you want to have fun? 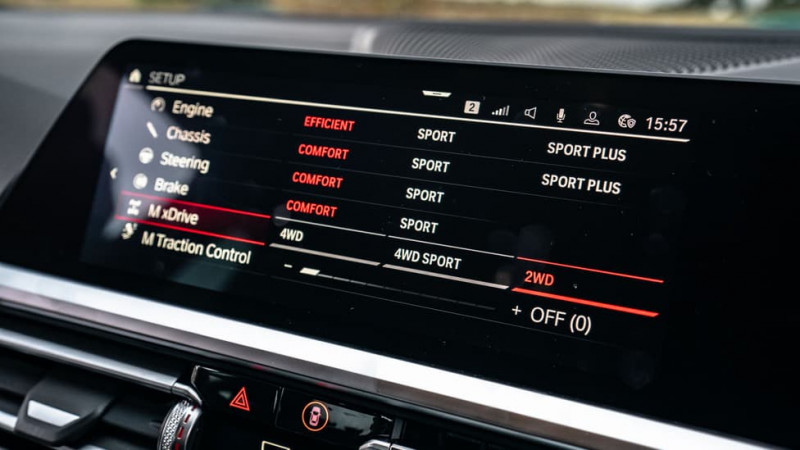 It certainly doesn’t add anything to the driving experience – at least not under normal circumstances. Even in its most ‘intrusive’ 4WD mode, the xDrive system is almost completely undetectable, with no suggestion that there’s all-wheel-drive trickery occurring under the floor. Although that’s partly because most of the time, the xDrive gubbins lie dormant, leaving the sticky rear tyres and the M Active Differential to work together in sorting out the power delivery.

On a dry road, the xDrive M3 retains the poise and balance that made it so good in the first place, with a sense of agility, stability and adjustability. Despite all the clever systems, it feels analogue and natural, which instantly puts you at ease in the driving seat. There’s no hint of understeer unless you try cornering at silly speeds, and even then, it’s easily dragged back into line. And when the standard M3 Competition has an unladen weight of around 1.7 tonnes, you don’t really notice the 50kg or so added by the M xDrive system. 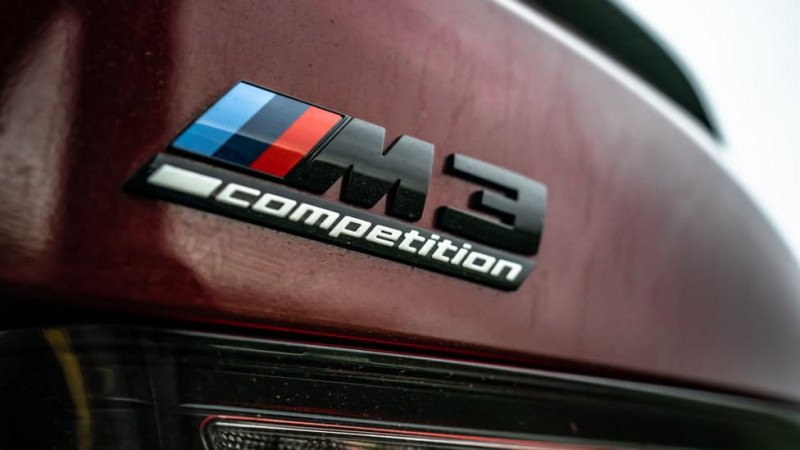 In truth, the driving modes make far more difference to the M3’s character, with Comfort providing a surprisingly supple – if marginally stiff – ride, while the steering feels light and fluid. And although the 3.0-litre straight-six engine is as smooth and as powerful as ever, the Efficient mode makes it unobtrusive and calm, as though it has nothing to prove.

Ramp things up to Sport mode and it all gets a bit livelier. The steering feels heavier, the brakes become sharper and the suspension feels tighter without drastically impacting the ride quality. It’s a bit firmer and there’s more feel for the road, but there’s a noticeable increase in body control. The engine also perks up, becoming more responsive to small twitches of your right foot and creating a bit more of that traditional bellow.

And when you step up to Sport Plus mode it really unleashes the savagery. The ride becomes intolerable on anything rougher than a billiard table, turning roads that were previously acceptable into craggy, bouncy tracks. And the engine goes feral, straining at the leash like a greyhound that’s seen a rabbit. 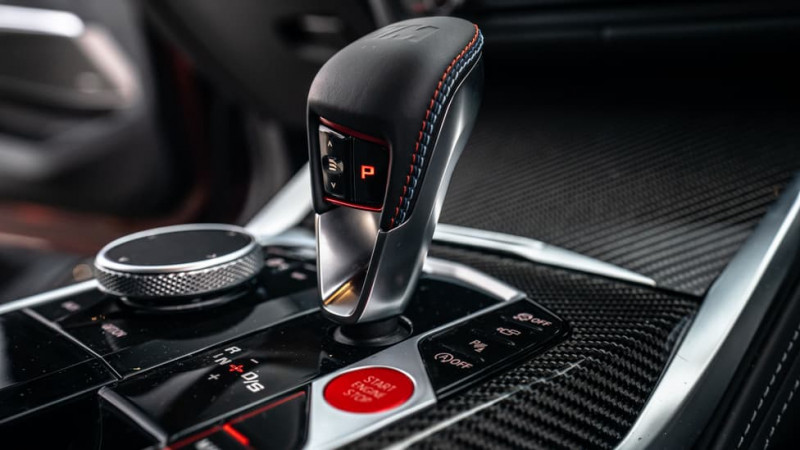 For most drivers, the four-wheel-drive system will only come into play when you let the car off the leash, and then only on a surface that’s either wet or uneven. That’s not because you get any more power – the xDrive car still has the same 510hp as the rear-drive car – but because it’s more effective at putting that power down. The traction from a ‘standard’ M3 is mighty impressive, but stomping on the throttle in bad weather is going to make the back wheels slip. In the M3 xDrive, however, the car just sends a little more power to the front wheels and away it goes. It’s so effective that the all-wheeldrive M3 does 0-62mph in 3.5-seconds – an impressive four tenths faster than the standard car.

But it isn’t just the stats that make the xDrive such an attractive option – it’s the way it makes that power accessible, rather than threatening. Even in wet weather, it allows you to enjoy the talents that make the M3 so much more than just an executive saloon. If you want to overtake, there’s no sense of panic about what the back end might do; you just pull out, put your foot down and let the car do the work. It will look after you.

Unless, of course, you’ve picked the 4WD Sport setting, in which case there’s a tiny bit of slip before the system backs out and sends some power to the front. Many M3 Competition drivers will never experience this – partly out of respect for the law and the safety of all road users – but mainly because the M3 Competition’s grip is prodigious. Without breaking the law in one way or another, it’s rather difficult to get the car to 'misbehave' shall we say. 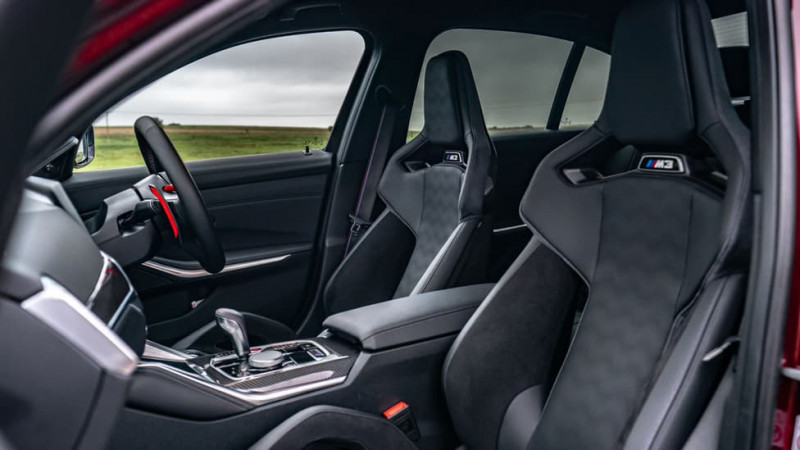 If you want to explore the limits responsibly, you’re going to have to take this car on the racetrack, at which point you can (relatively) safely disengage the traction control. At that point, you’ve got a rear-drive M3 Competition that feels every bit as engaging as the standard car.So does the M3 Competition M xDrive make sense? Absolutely. There’s plenty to be said for the rear-drive M3 Competition, which is cheaper, lighter and, 99 percent of the time, just as good. Even the longer 0-62mph time is irrelevant, because telling the difference between 3.9-seconds and 3.5-seconds is nigh on impossible unless you get the stopwatch out. And that’s difficult when you’re pinned into your backrest. Anyway, the whole point of the M3 – and indeed any super saloon – is to be useable in every situation, and the M xDrive system fills that brief perfectly. It’s exactly like a rear-wheeldrive M3 Competition in every way, but severe weather is less likely to stop play. And that isn’t just an advantage when you want to have fun and the road’s a bit damp; it also makes the M3 a better family car, more capable of dealing with winter weather on the school run or the daily commute. It’s the ultimate win/win situation, and the price is right too. Of course, £3,000 is a hefty amount of money in anyone’s book, but it’s hardly likely to put buyers off. After all, if you can aff ord a £75,000 car, you can probably aff ord a £78,000 car. So, this has to be the new M3 Competition of choice.

I have read a few comments on social media snubbing the idea of an all-wheel drive M3, I think these detractors need to get real. While I would be the first to admit that the driving dynamics of M3s of old would’ve been ruined had they been four-wheel drive, people need to realise that modern M cars have enormous amounts of power and therefore performance, the likes of which would overpower a traditional two-wheel drive setup and likely be beyond the control of most mere mortals if they were strictly rear-drive. From what I understand the new systems still prioritise drive to the real wheels, but switch to all four only when absolutely necessary – so what’s the problem?