I’ve always loved the idea of a street legal drift car,” says Logan, as he takes NZPC on a tour of what was once was a stock-standard Bimmer and could now perhaps be called a Kiwi version of the infamous Eurofighters that terrorise the international drift scene. 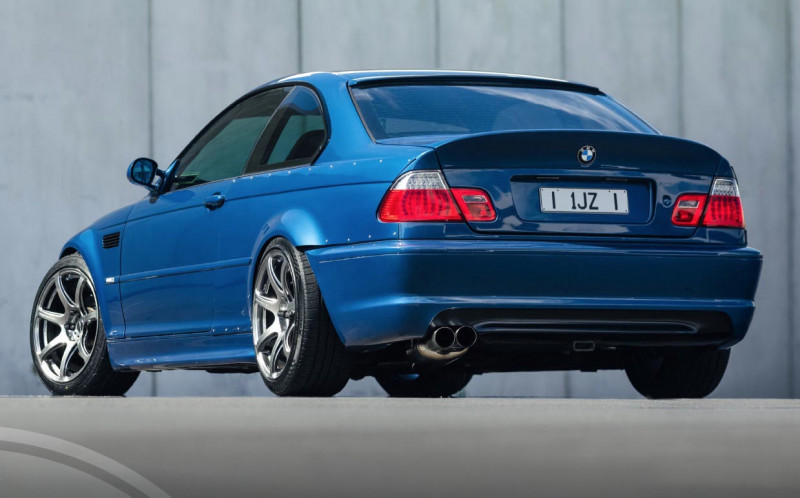 Logan always knew what he liked, and had taken a keen interest in all things circuit oriented from the age of five years. However, once he became friends with a group of fans of the subtle art of sideways slide — a fancy way of saying drift — that direction changed, and the goal became to build something perfectly suited to both baking tyres and getting to the day job in style. He may have put it off for a few years to start with, but what he’s done in the past two years is definitely worth a look. 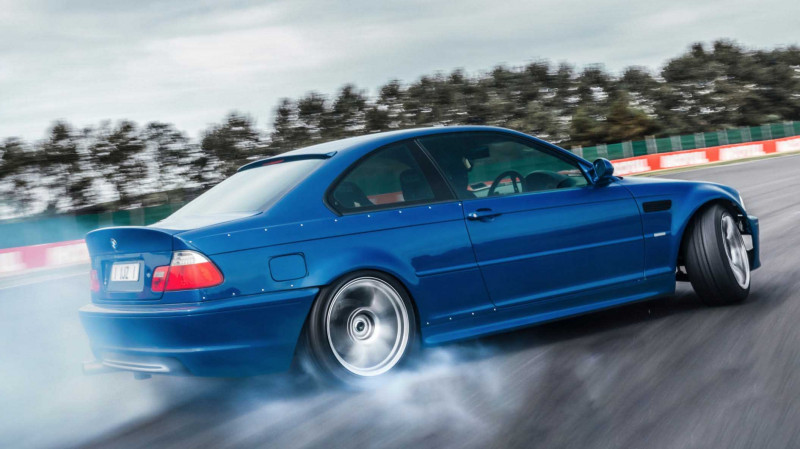 BMW markets itself as the ultimate driving machine, and it is tough to argue with the pedigree of the German marque. With this in mind, Logan embarked on his build journey and began looking for an E46 platform from which to get the project underway. Locating a tidy and standard 328i in Topaz Blue Metallic, he quickly did a deal and happily drove home with thoughts of what was to come formulating in his mind.

ADAMANT THAT THIS WOULDN’T TURN INTO A DEDICATED CIRCUIT MACHINE, THE E46 HAS BEEN BUILT SO THAT ONE DAY IT’LL BE ENJOYED ON THE STREET 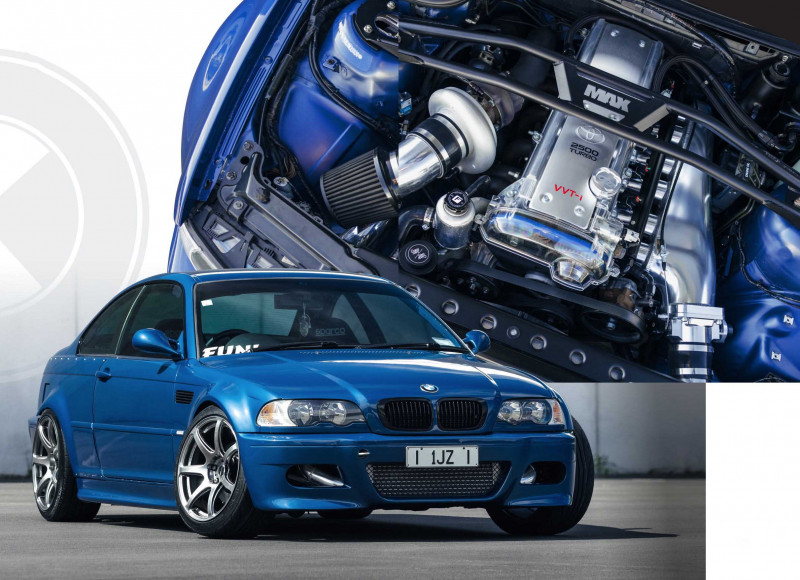 The motorsport arm of BMW is generally on the money when it comes to styling, and in this case there wasn’t a great deal of need to go too outlandish with the wild wide body style we now see adorning most Kiwi-built sliders. The tasteful M3 style body kit has been largely adopted and is set off nicely with a fibreglass boot from an M3 CSL model and a racing dynamics roof spoiler. All of this comes together perfectly with a set of 18x9.5-inch Work T7R wheels that are clad in semi-slick rubber up front to get that all-important turn in and front grip, and whatever is on the rear that is chosen to turn into clouds of tyre smoke.

IT’S A TRIED AND TESTED COMBO THESE DAYS; THE 1JZ-GTE, PAIRED WITH THE OL’ FAITHFUL HOLSET HX35RS TURBOCHARGER. CONTROLLING BOOST IS A 50MM TURBOSMART PROGATE GENV 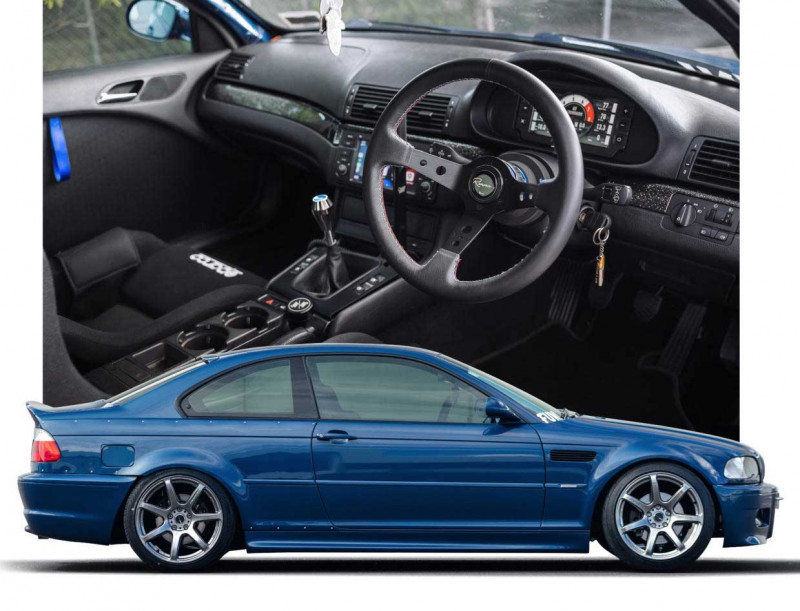 As anyone who has ever turned a tyre sideways knows, suspension plays a huge part in the enjoyment of the day. In this case BC DS Series Coilovers come together with a combination of Parts Shop MAX and reinforced factory components, while all the bushes have been replaced to cope with the stresses of a day on track. Making sure that the car pulls up — hopefully before any sand-trap beach excursions — is the job of a factory BMW set-up, aided by GSS braided lines and semi-race pads. 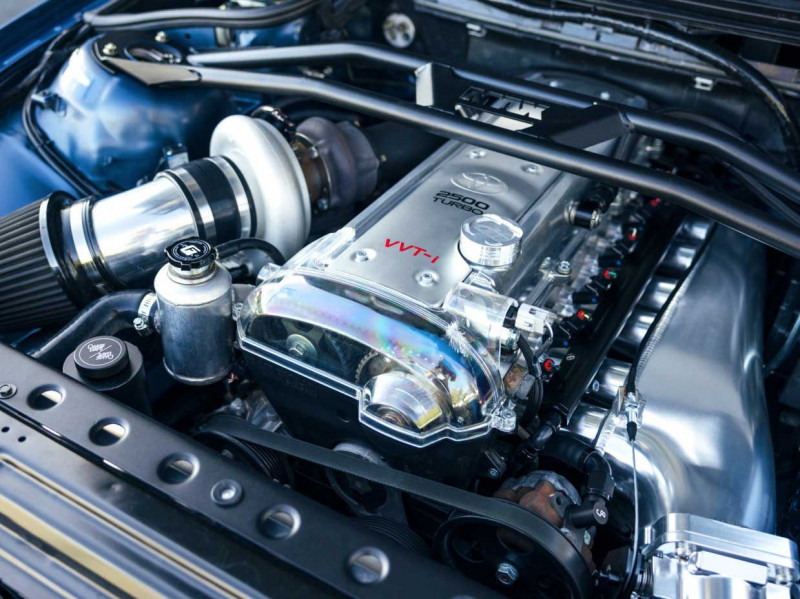 Now, to this point it feels a little as if we are talking about a one-make race series car, but it starts to get interesting when the bonnet comes up and the eyes take in a very well specced and prepared 1JZ-GTE VVTi engine that has been built and installed with the sole intent of reliably destroying tyres. Yeah, there is that daily driving thing, and sure 345kW at Logan’s disposal makes getting the morning coffee more fun, but this is a solidly put together offering that, although stock standard inside, is well adorned with quality bolt-on parts.

NOT YOUR CONVENTIONAL SWAP, YET THE 1JZ-GTE ENGINE SITS RIGHT AT HOME IN THE BMW’S ENGINE BAY. AS THEY’RE FITTED WITH A STRAIGHTSIX FROM THE FACTORY, IT MAKES SENSE TOO

A 1JZ responds nicely to more air and fuel, and here the chosen combo consists of an MSE Turbos HX35RS Gen 2 turbo sitting on a custom manifold care of Walsh motorsport. It takes a healthy drink of 98 octane via 1000cc injectors, then spits the spent gases out of a custom three-inch exhaust put together by David Miller of MMS, whose handiwork and expertise seems to feature a bit in the car. A relatively modest 20psi on pump gas means there is plenty left should there ever be the desire for it, and the avid reader will know just how much these Toyota-built lumps of iron can handle. This is a car that was put together with the intention of both wide open laps and sitting in the Auckland gridlock, so keeping it cool was a priority. The fingerprints of Fenix are all over it, with a Pro Series radiator and electric fan set-up, Pro Series intercooler, and dual-pass oil cooler to keep those engine temps in check. It’s never too much of a surprise when you are covering a drift build and the names of the Jenkins brothers or Adrian from Fenix/Elwood parts enter the conversation.

When you’re running a stock block and you are busy looking out the opposite passenger window in a haze of smoke, you want to be confident in what is going on so Haltech’s Elite 750 ECU has been installed with a Wiring Specialties pro harness and Haltech wideband sensor. This all talks to the IC-7 dash unit, which Logan can cast an eye over while working the wheel and pedals. It takes a bit of knowledge to tune a build like this and make it work for both track and street, and the experience and proven results being achieved by JT Performance saw James entrusted with the tuning duties.

To date the BMW ZF gearbox is doing the job, sitting on a custom MMS mount with a PMC adapter mated to the JZ, but it is getting tired and it seems it might not last much longer. In its place will be a Getrag six-speed variant, which will remain mated to a factory-style clutch and upgraded flywheel. The diff, although locked for now with a welder, may end up with an LSD upgrade at some point.

Destined for a cage next as skills and perhaps safety demand, for now it’s all street cruiser mode inside the car with a pair of Sparco Evo seats and four-point driver’s harness, while amusingly, the factory six-stack CD player still struggles to play tunes over the top of tortured tyres and JZ revs. Some nice custom touches find their way into the door cards and centre of the car, keeping it classy.

Is it done yet? Who knows? Once the cage goes in, it’s probably not too hard to imagine a few more psi being thrown at the car; but, equally, it’s still a nice cruiser and Logan mentions some more audio would be nice. Either way, keep your eyes out for this build at the track or on the street near you. Logan’s not quite done yet but what he has done so far is well worth a closer look should you get the chance!

WITHIN THE BMW PLATFORM, THE ‘M’ CARS ARE THE PICK OF THE CROP. SO WHAT DO YOU DO WHEN YOU HAVE A NON ‘M’ CAR? WELL, THE M3 BUMPERS AND COMPONENTS ARE A BOLT-ON FIT, SO LOGAN’S WEARS M3 BUMPERS AND SKIRTS AND EVEN SUSPENSION COMPONENTS LIKE THE SWAY BARS

OPTING FOR A STREET JAPANESE/EURO LOOK, LOGAN DECIDED UPON THE READILY AVAILABLE WORK T7R WHEELS IN 18X9.5-INCH (+22) ALL ROUND TO FILL THE ARCHES. AND, SQUARE RUBBER TOO, WITH 235/40R18 TYRES