The E36/7 Z3 offers bargain summer motoring – we take a look at what BMW’s affordable roadster has to offer through one owner’s eyes. 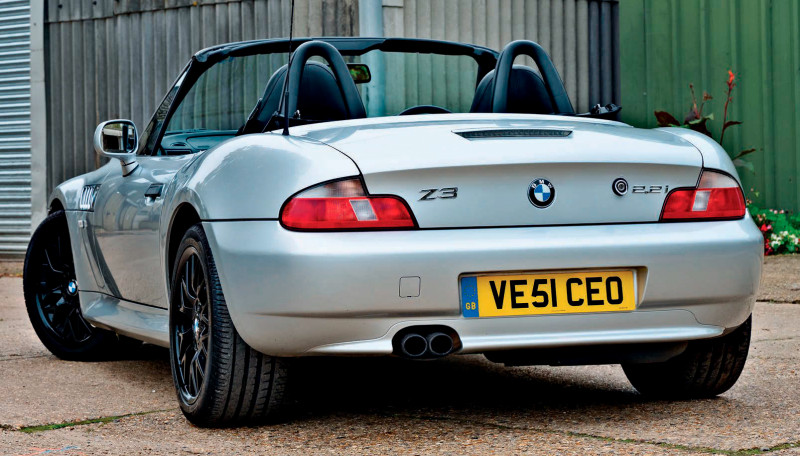 Matt Swanborough has become no stranger to BMW Car. A large chunk of Matt’s enviable retro BMW collection has already appeared in these pages and for good reason – the 40-year old has excellent taste in vehicles. Now a Global Marketing Lead for a software company and living in Guildford, Surrey, Matt is originally from South Africa and grew up in Johannesburg as the son of an English couple who migrated in the 1970s. Matt moved himself and his family to the UK in 2005 and his unique background and experience of the two countries has certainly informed and fed his view on cars. Matt’s lust for older BMWs has led to a collection today which spans everything from the Z3 you see here to anE38 7 Series and more. While Matt has, as he puts it, had “dalliances with other brands” BMWs have been his ‘go to’ for the last 17-years. In short, he’s our kind of guy.

“The Z3 is all about fun for me and my passenger”

The E36/7 Z3 you see here is a 2001 Titan Silver Metallic 2.2 Sport which Matt has owned since the first lockdown of 2020. But what drew Matt to purchase this BMW in particular, we quiz?

“100 percent the look of it,” Matt smiles. “I am not normally a fan of black wheels but for me everything about the car works. Being a ‘Sport’ model it was pretty high up on the list for me as aesthetically I prefer them for their more modern looking brushed aluminum dash trim, sport seats and slightly lower stance on the sport suspension.

“Titan Silver is also a really great colour for the E3x cars in general, it’s a perfect period colour for the nineties and also really good for not showing up dirt!”

With 108,000-miles showing on its dials, Matt’s Z3 has the five-speed manual gearbox and as part of the Sport package it has that slightly firmer and lower suspension setup, clear indicators, brushed alloy dash, Sport seats and 17-inch BBS-style alloys. The car was in generally good condition when Matt took ownership as he explained:

“It had a few niggles that were mainly wear and tear items, shortly after purchasing the car I needed to replace the brake discs and pads, give it a service, polish up the headlights and I had a bit of a random issue with the temperature gauge bouncing around with strange readings. Fortunately I had a spare cluster kicking about so swapping out the gauge resolved that,” we’re told.

Niggles aside Matt has thoroughly enjoyed the ownership experience to date and the car has proved reliable, which, let’s be honest, is often a concern with any older BMW.

“I have never owned a BMW which starts up quite like the Z3. I have had many, many six-cylinder BMWs with various M50, M52 and M54 engines but nothing fires-up like the 2.2 M54,” Matt enthused. “In my view what makes it unique is how it seems to need no more than a second to turn over and it’s purring and gargling beautifully. Even when I haven’t used it for months it still fires-up almost instantly on the turn of the key. In terms of reliability the car has been absolutely faultless for me – other than that temperature gauge playing up.”

With prices starting at around £2,000 for a 2.2 Sport such as this, the Z3 offers serous bang for buck, but as a qualified BMW expert with experiences across the range of modern classics we were keen to understand Matt’s viewpoint on the model.

“The Z3 is a fantastic product, and for me, it has everything I need from a roadster,” Matt said. “What do I mean by everything? It looks great, particularly with the top down, in a way that average convertibles cannot match as they simply weren’t designed to be topless like a Z3 – a proper roadster – was. It sounds great, the six-cylinder gargles and even pops on deceleration, it is pure magic with the revs up and roof down on a B-road. And finally, the drive is bliss. I have enjoyed blasting around B-roads, probably feeling like I was going a lot faster than I was, and motorway cruises – top up or down. I do sometimes feel conscious that I probably don’t look like the kind of bloke you’d expect to climb out of a little roadster, as a fairly heavy-set six-foot guy, but I really couldn’t care less – the Z3 is all about fun for me and my passenger.”

A big part of the BMW ownership experience for genuine enthusiasts is the support from the car scene, the assistance of like-minded owners can make or break a car fan’s love for a particular model. As you have to be with cars of this vintage, Matt can get his hands dirty when time and the job in question permits, for everything else he uses Ultimate Velocity in Ash Vale. And Matt is the type of guy who likes to get involved with fellow owners to play his part in sharing love for the model he is driving too.

“The Z3 crowd seems to me to be a more mature one, very diverse in many ways but it seems to be one of those particular ‘age and stage’ type cars that comes out of nowhere and suddenly becomes an itch you simply need to scratch,” Matt said. “Some get hooked and rattle around in Z3s for years, others covet them as weekend cruisers and there’s even those who modify and tune them.

“As with most models there is a bit of disagreement on what engine to go for, usually made of those with big engine models slagging off small engine or four-cylinder cars and the four-cylinder owners assuring everyone and themselves that it is everything they need.”

It’s hard not to see the Z3 as a modern classic, but some would consider it an out-and- out classic given that even the newest examples are now 20-years old. Where does Matt sit on the argument, we wonder? “It’s hard to think that it wouldn’t be a classic already,” Matt muses. “What is kind of funny about the Z3 is that when they were new they were praised for their retro styling at a time when there was a bit of a revival of the forgotten ‘roadster’ body style. Since then the Z3 has really come into its own and the retro looks have aged incredibly well – making the car arguably better looking and more appealing 20-years later than ever before. “Something which was built to be a bit of fun with form before practicality always has greater potential to be put away and coveted for weekend use than gobbling up miles as a daily driver, only to be scrapped. I think the Z3 has the ability to attract the attention of younger crowds as it is different and interesting, and a bit special.”

If you’re anything like us then Matt’s persuasive ways will have you heading for the classifieds to search for a Z3 to call your own, which leads us to wonder how values are sitting these days for a BMW that was once almost unbelievably affordable.

“Values seem to have taken a sudden turn in the past year – they have experienced a sharp rise,” Matt said. “Personally I would hope they stay reasonably low if only so that more people can easily buy and enjoy these cars. They lose a bit of the fun factor when they become super valuable, and people don’t get out and enjoy them as much. But currently there are still plenty about to choose from.” Unlike many of his cars though, Matt won’t be keeping his Z3, with the “itch scratched” as he puts it the time will soon come to part with the car.

“The car was meant to be something for my wife and I to get out and enjoy, but unfortunately as much as we have tried to make it work the reality of having two little people in our lives means that over the course of a year that may only happen once. As so many would say, if I had the space in a nice big garage to tuck it away in the corner, I would do that!” Whether the roadster life is an itch you need to scratch or more of a long term commitment you are thinking of making, the Z3 remains more than worthy of consideration – especially with the summer sun shining.

Matt’s Z3 boasts a couple of minor modifications including those original wheels now painted gloss black, Powerflex poly bushes up front and a K&N air filter to help it breathe and sound a little better than before…

2.2 M54 engine offers cheap six-cylinder thrills. Matt says he doesn’t usually like black wheels but that on this car they work.